And I got out just in time.

Boyfriend and I went to Hong Kong for Dragonboat Festival weekend. I had assumed we’d be able to watch the dragonboat races in the Hong Kong harbor. Turns out that the races were actually the week after.

We got in at night and flew over the bay. It is absolutely beautiful at night and no photo can do it justice: 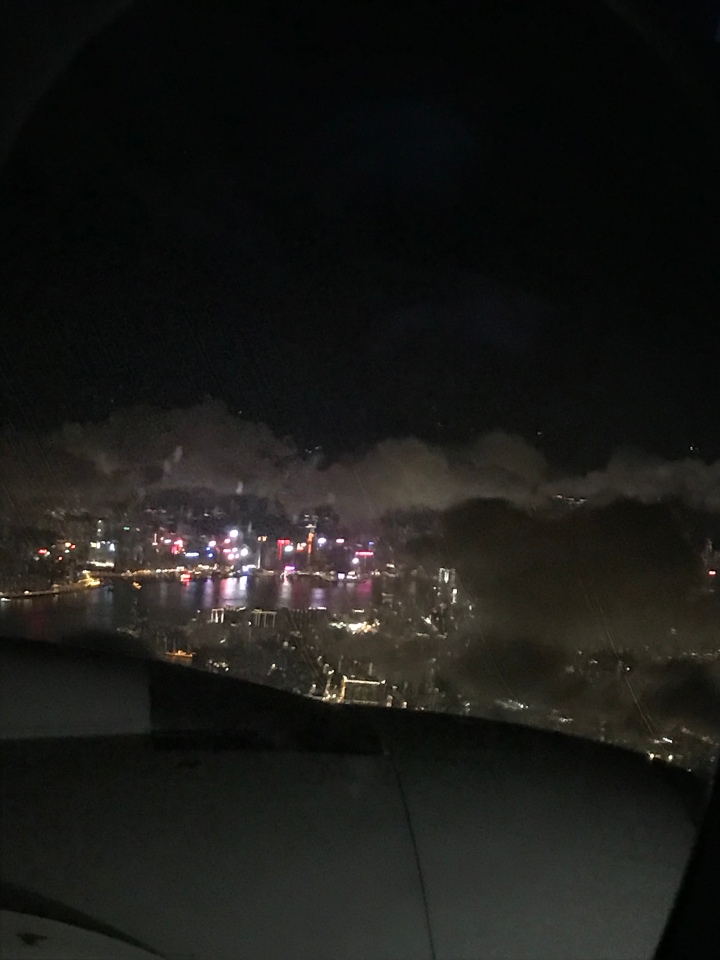 We took the MTR to Sheung Wan and walked to our hotel in SoHo. In our walk, a lovely fat cockroach landed on my head, scuttled, and the flew off. I turned around to see it run off.

Needless to say, I was utterly grossed out. We got to our hotel, which we chose due to its proximity to Craftissimo. I immediately went into the shower due to the whole cockroach fiasco.

On Friday, we woke up to have a yummy Hong Kong breakfast: noodles, beef satay, and coffee with tea 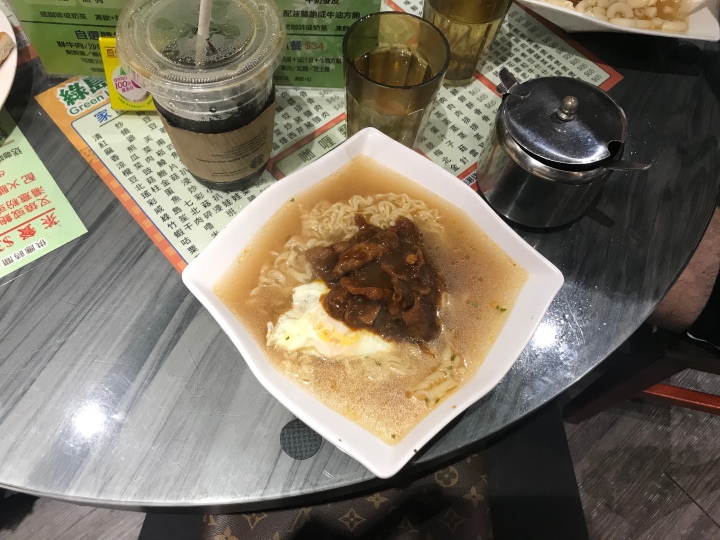 I usually don’t have cravings for Hong Kong breakfasts, but whenever in Hong Kong. Noodles all the way. I’m not a huge fan of the broth with macaroni noodle breakfast, but the above. Perfecto. I wish it came with dumplings, but thats not Hong Kong apparently.

Boyfriend and I then took the metro and bus out to Shek-O (on the southern side of the island) to hike on the Dragon’s back. 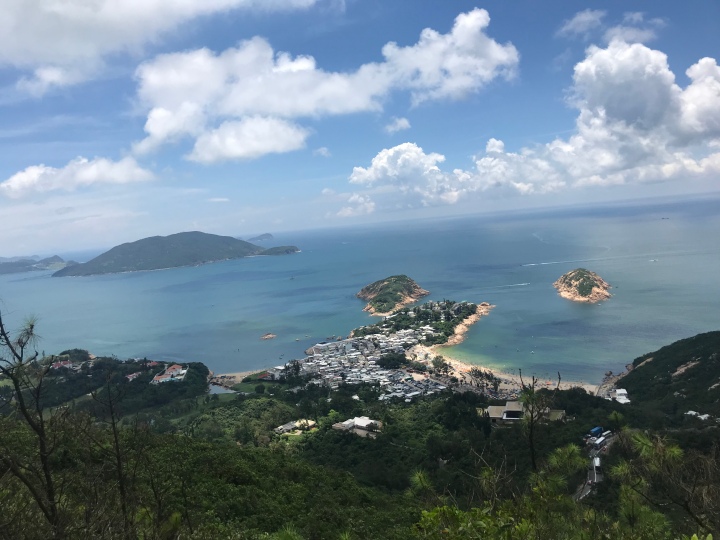 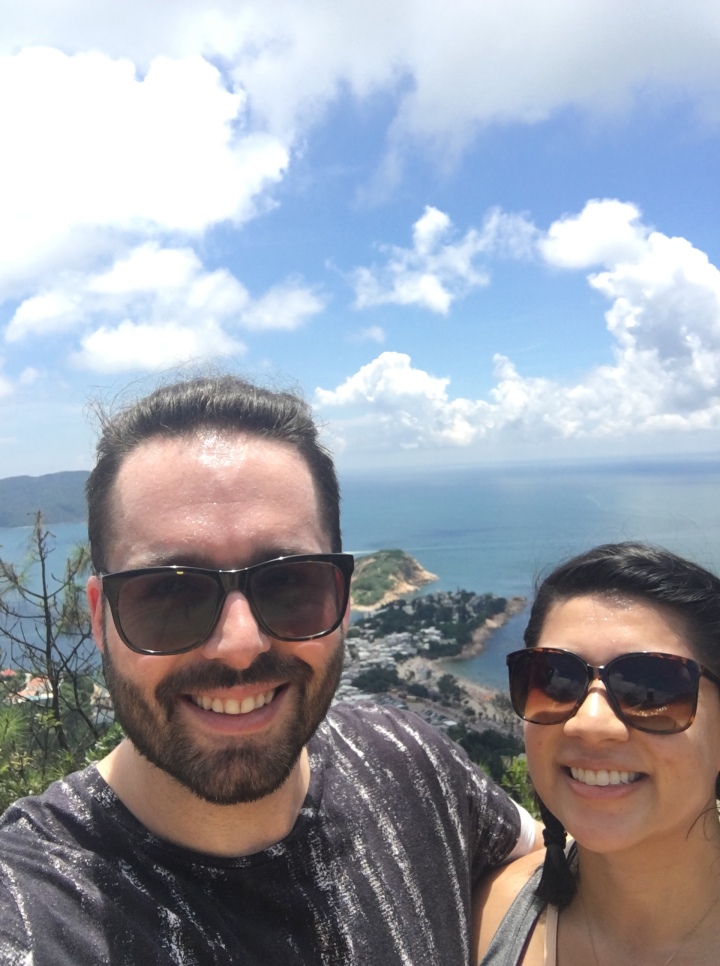 We had read that the Dragon’s Back hike was ~4 hours. It was more like 1.5 hours. It was absolutely beautiful being along the ridge on the southeast side of the island, seeing Tai Tam Bay and Stanley on the west side and Island Bay on the east. However, as you can see. There is no shade. Boyfriend and I only put sunscreen on our face. And it was ~33C. We got hot, sweaty, and sunburnt.

Instead of going directly to the hotel, we took a 45 min detour and hiked down to Shek-O beach. We ripped off our clothes and went swimming in our undies, along with the hundred of other Hong Kong-nese and tourists. The water was clear, warm, and calm. It was so refreshing.

After bathing and taking a quick break, we jumped into a taxi and got a ride back to our hotel to shower.

We then walked around the city and got some dim sum before heading over to Craftissimo for beers. We first found this place on our last trip to Hong Kong, and had pretty much assumed we would spend a majority of our trip there too. 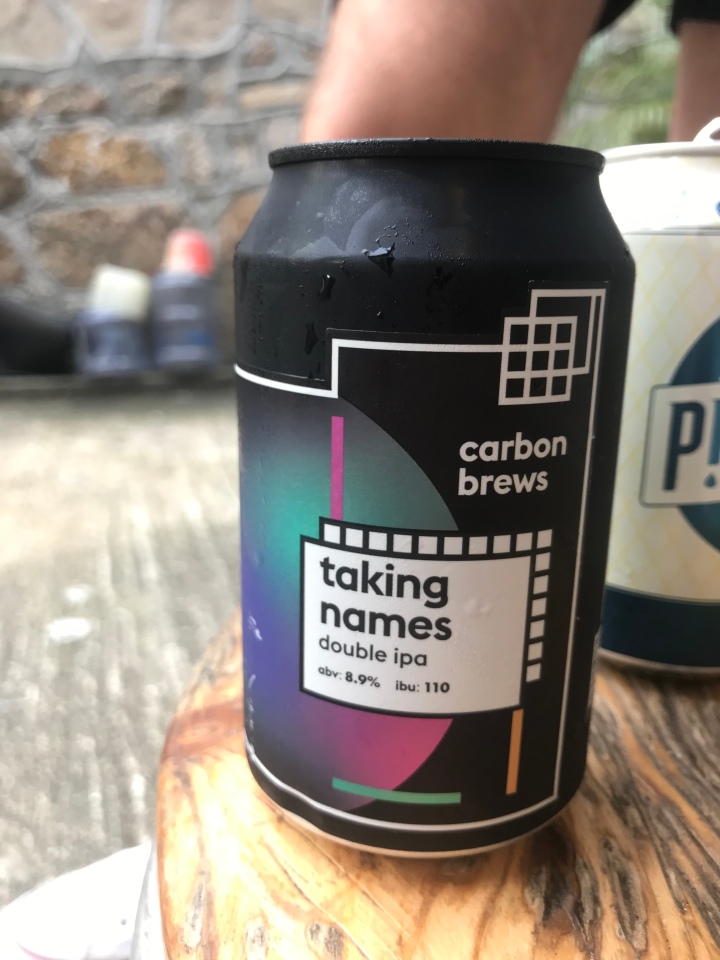 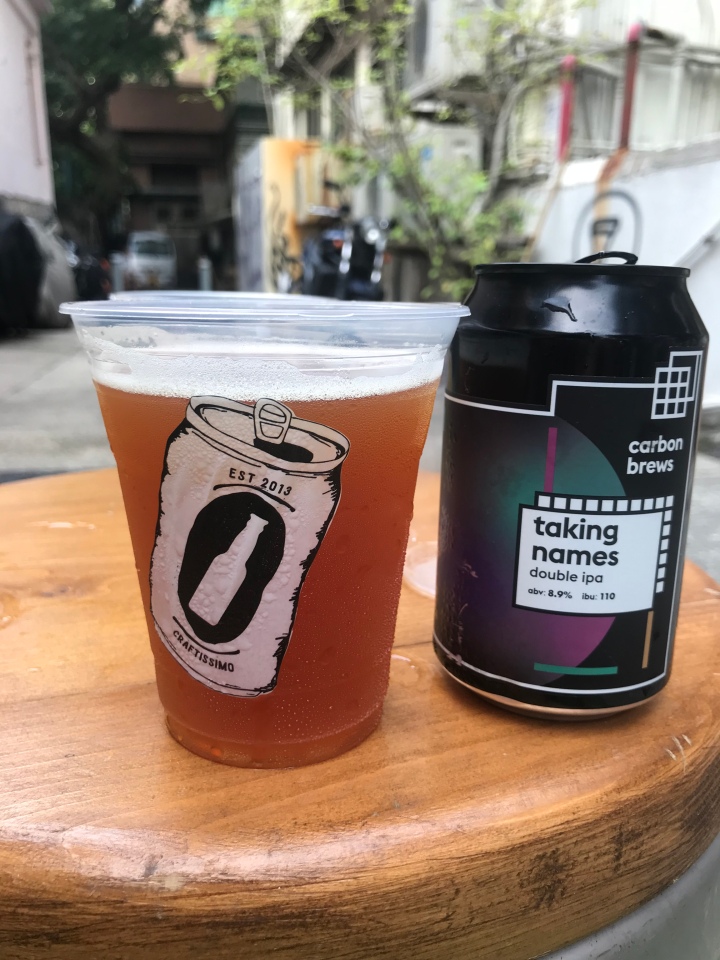 After, we walked down to Blue Supreme Beer Purveyors, who literally have the BEST fries in the whole world. I am a fries connoisseur and have eaten a good number of fries in my life. But this is by far the best I have ever eaten. Cut at the right size, perfectly cooked, and covered in AMAZING herbs. All with a wonderful sauce to dip in. 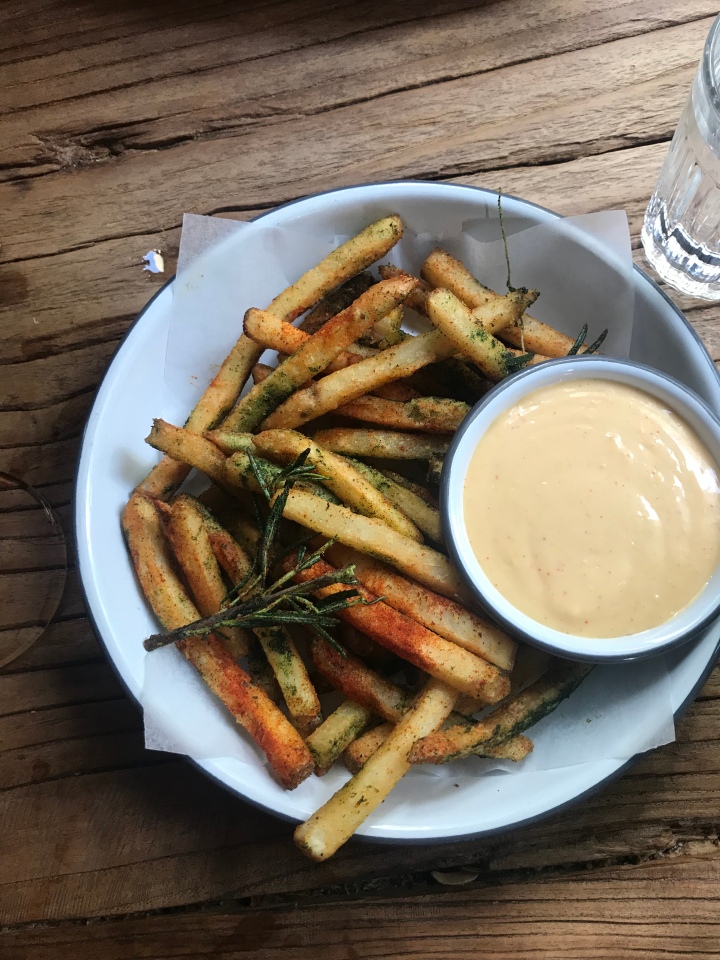 If you’re ever in Hong Kong, go here and eat their fries. You don’t need to get anything else. Just get their fries.

After, we headed out to Chom Chom. Boyfriend and I had found this restaurant the first time we came to Hong Kong in 2016. It was completely packed so we never got to go. So we made it a priority to go this time. And wow, the food is to die for. 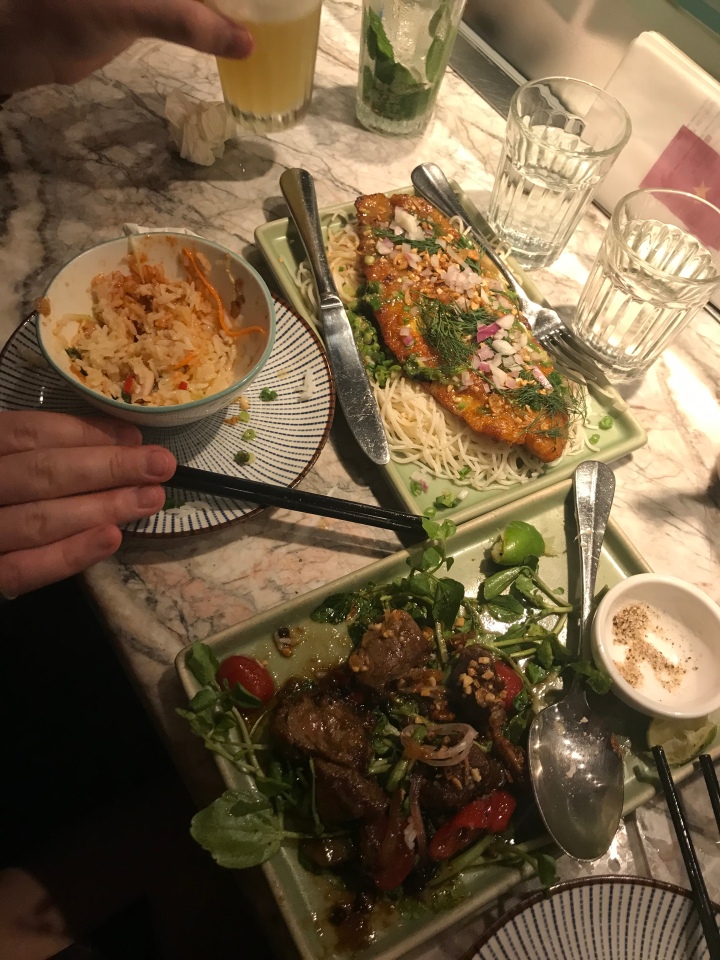 Food so good, I couldn’t even wait to take the photo. The food tasted like the food we had in the streets in Hanoi. Flavorful, light, and spicy. So. Freaking. Good.

After, we got some drinks at our favorite club, Club 7-11

It’s essentially an open-air 7-11 that sells booze in the middle of a bunch of bars, where you can drink in the streets. We call it “Club 7-11” as you can essentially just buy drinks, stand/sit right outside and drink. The bars all around are blasting music and there are usually people in the streets anyways. It’s a club!

It was here, in 2016, where Boyfriend and I saw on the ledge, drinking a beer, when Boyfriend asked if I would ever move abroad, somewhere like China or even Hong Kong. And I said yes. It’s a special place for me now. Because without this conversation or this 7-11, we probably wouldn’t have ended up in Shanghai. Or anywhere else we may go to in our future. This was the start of our global adventures (yes, we were already abroad at the point I guess).

The next morning, we had breakfast at the amazing Dim Sum Square. We found this place on the last trip we made to Hong Kong. They have the BEST crystal shrimp dumplings

After, we headed out to Causeway Bay for some shopping. 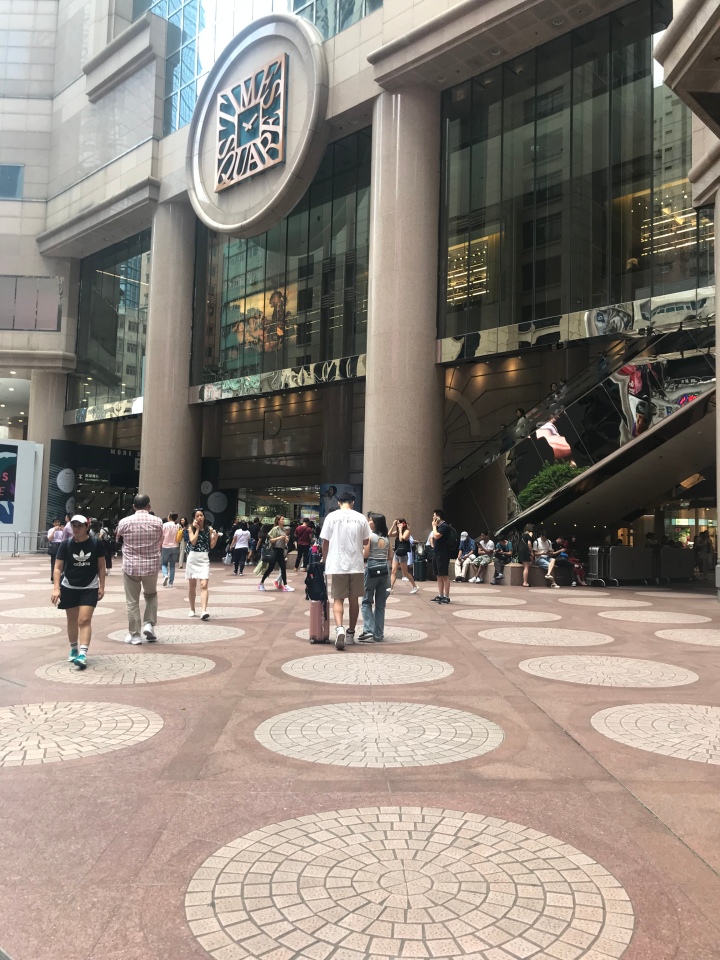 From where I took that photo of the mall, you could already feel the AC BLASTING into the streets. You could just chill in the plaza, and be cooled down.

After failing at finding anything for shopping, we walked from Causeway Bay to the Mid-Level Escalators. It was a great exploration of the city 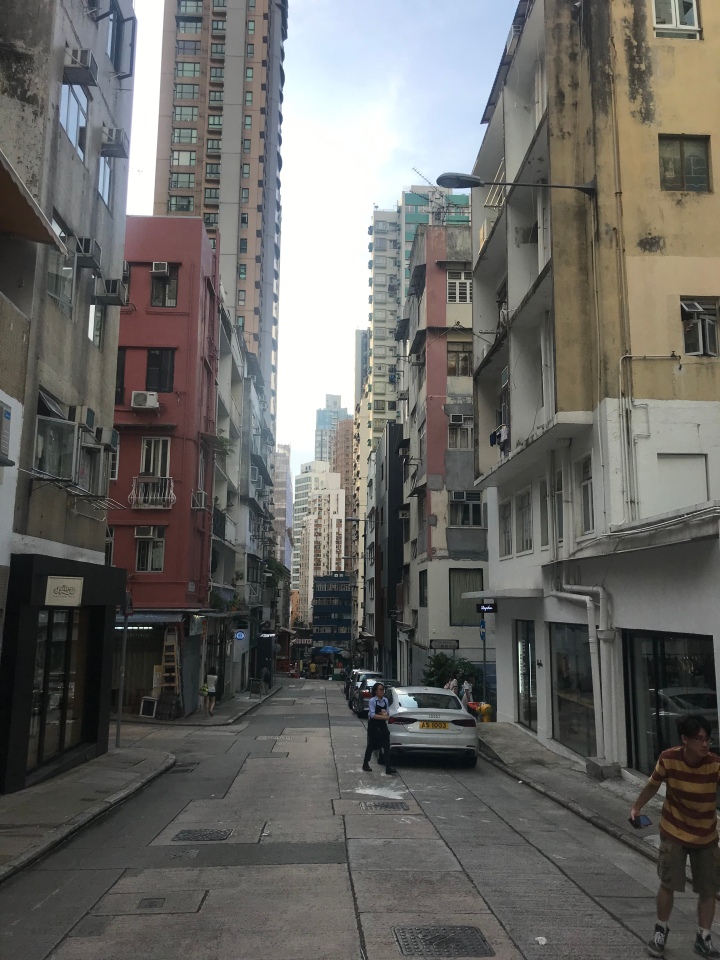 Once getting to the elevators, we rode it a little before chilling outside of Stauntons’s, which has a great area to sit to people watch going up the elevators and drink

After, we went to Blue Supreme Craft Purveyors for another batch of their amazing fries. Best fries in the world.

Then we headed to Craftissimo where we had some beer and met 2 guys who just moved from London to Hong Kong. We talked to them for awhile and ended up getting dinner with them. Sometimes, these things just happen when you’re traveling! They were fun

The next morning, we got a taxi directly to the mall that has the MTR line to the airport. We got a light breakfast and noticed that the entire mall was pretty empty. The city was pretty empty. Neither Boyfriend or I really wanted anything so we jumped on the train and got to the airport and checked in. We got food at the airport and wandered a bit to see if we wanted to buy anything (Hong Kong International Airport is considered to one of the best shopping in an airport, only beaten by Singapore International Airport) Then we took off back to the Mainland.

The next day, we found out why the city felt so empty: hours (actually like 1-2 hours) after we left the city on the MTR line to the airport, one of the biggest protests in Hong Kong started, with estimated 1 million in the streets. This protest was against the extradition bill that the Hong Kong government had brought that would allow people in Hong Kong to be extradited to China to be persecuted.

To learn more about what’s going on in Hong Kong, here are some articles that can explain the situation:

Internet has gotten very restricted within Mainland China this week. Everything is slower to load, harder to access. Pages that used to be accessible are no longer working, including Atlassian/Jira that I use for work.
I love Hong Kong. I will always happily go back. I could even live there (if i figure out how to live in heat).

I hope that everything and everyone in Hong Kong is okay and that this ends peacefully soon.