I participated in the worlds largest migration this February, which has not been as bad as it has been described. Maybe it’s because I’m a master traveler now? Not sure. But we’ll use that excuse

Boyfriend and I had a 10 am flight of Shanghai Pudong to Chiang Mai, Thailand. It was off to a bad start. The night before, we went out with some friends for a CNY dinner at this wonderful restaurant (Commune Social) and then got drinks until midnight at Up Shanghai. We got home and was about to start packing when Boyfriend accidentally dropped his phone. It then proceeded to look and act like this: 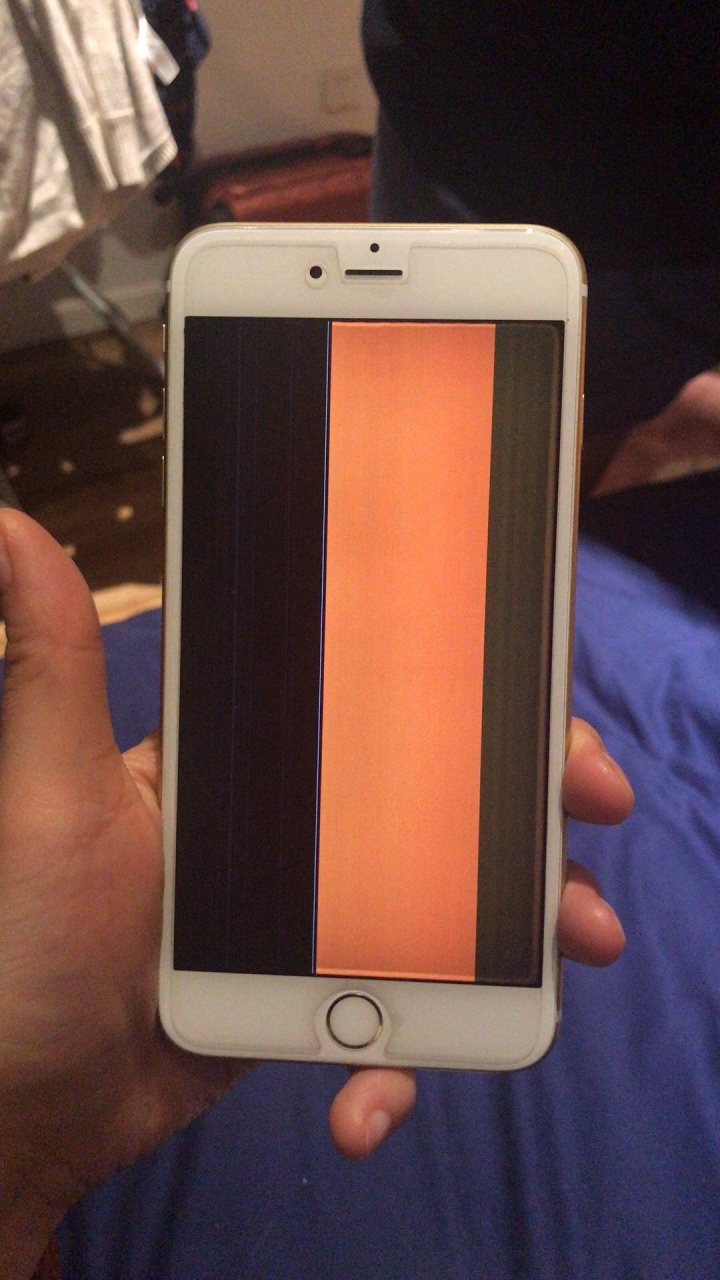 Just unfortunate. We tried logging into his trip.com account into my phone, but he couldn’t remember his password. Eventually, we made it work and we had all of our bookings available for our trip

At 6 in the morning (after going to bed at 3), we left for Pudong. On a didi, because both of us were lazy. I imagine that if we took the metro + the maglev, it would have been PACKED. instead it was easy breezy to the airport. Then, checking in. Our flight had a really long line, and so I thought “let’s jus try the self service automatic teller”. Usually those only work for Chinese nationals and never foreigners. But it worked, and we bypassed the line. Then we got to immigration. That was a large line if you had to deal with the immigration officer.

Good thing both Boyfriend and I have E-Channel. What’s e-channel? It’s an ingenious system China created that allows you to scan your passport/photo/thumbprint using a machine, and therefore bypassing all human interaction. I’m not sure if it’s only available for Chinese nationals and foreigners with a residence permit, but it is SWEET

So we literally got from the entrance of the airport to past security in the span of maybe 20 minutes (which is the normal average time). Maybe if we had to deal with humans, it would have been long and hellish

We finally got on our plane and made it to Chiang Mai. We got a taxi to take us to our hotel, which was astonishingly nice for how cheap it was. We checked in and dropped our stuff off

We walked from our hotel into the middle square of Chiang Mai. The city is built with a central square, that is surrounded by a moat and roads leading to it.

Our first stop was Wat Phra Singh. Fun fact. I love temples. They’re really gorgeous. Here are some of my favorite shots of this gorgeous temple: 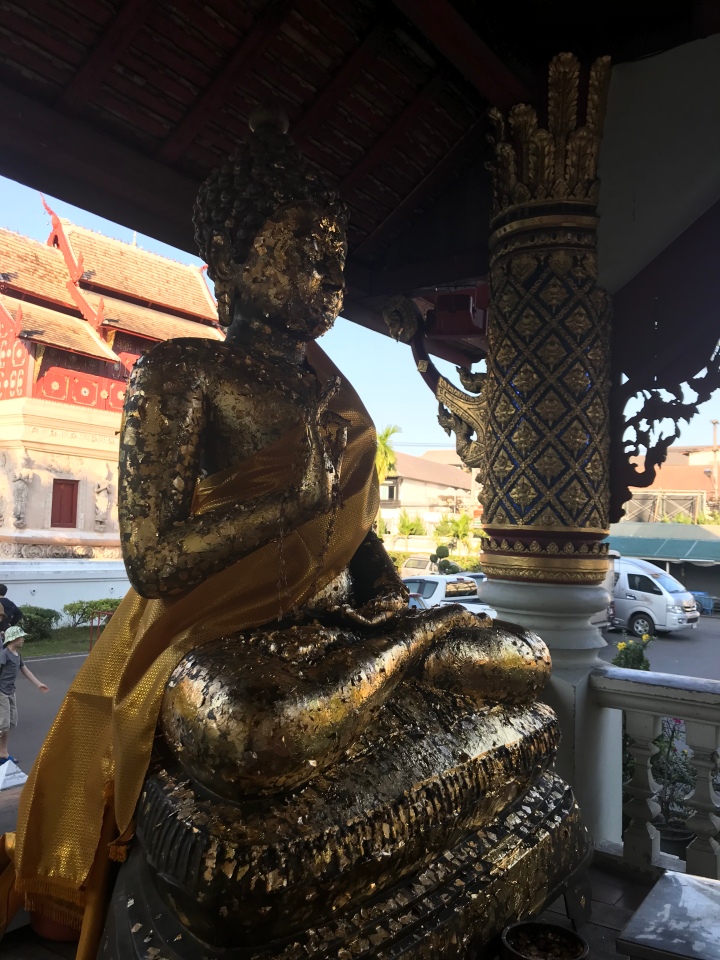 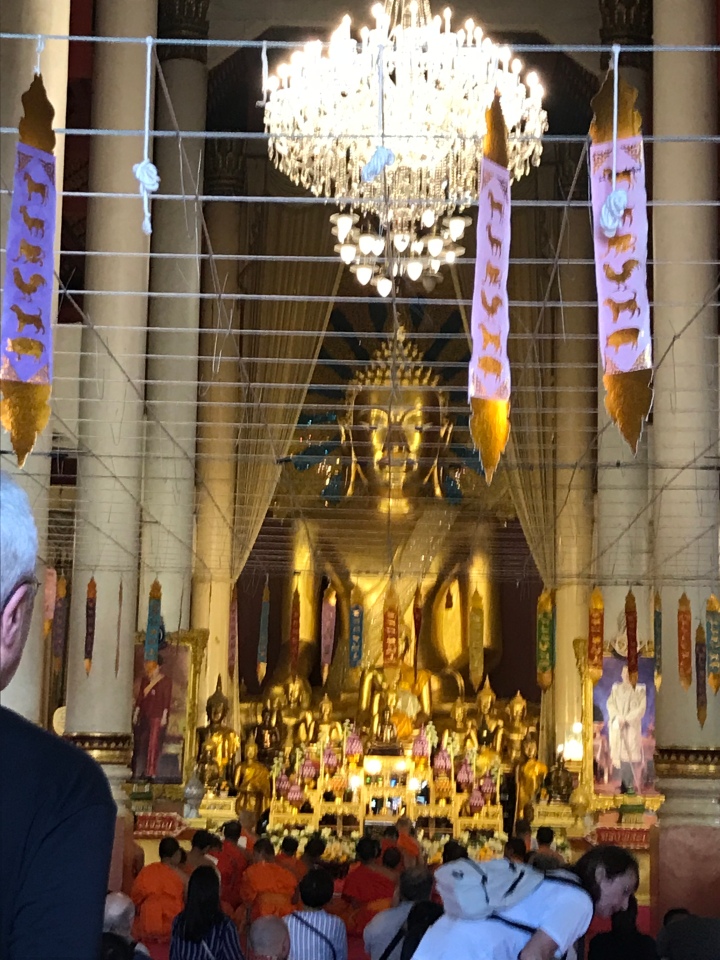 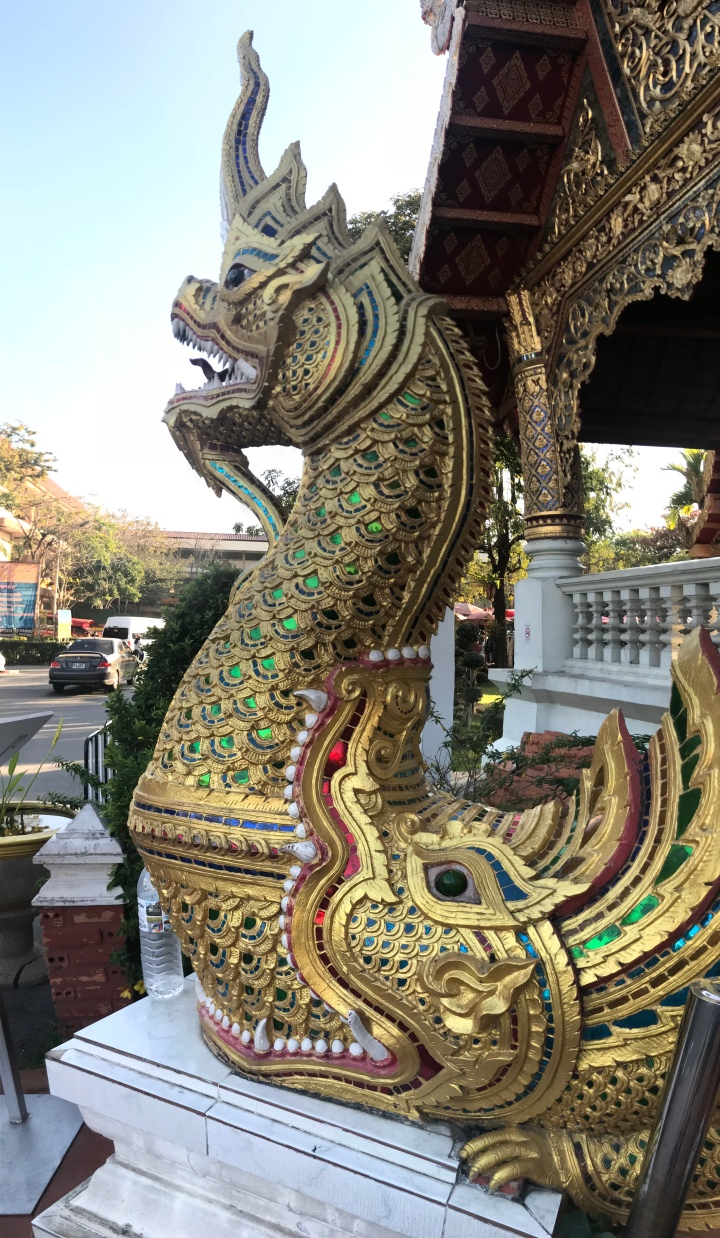 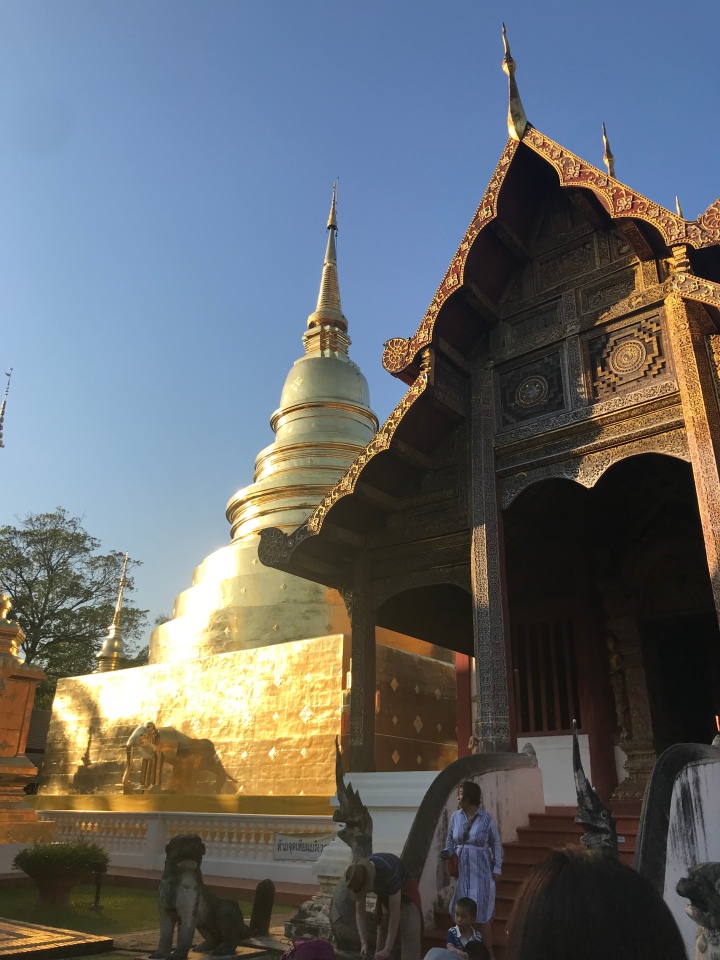 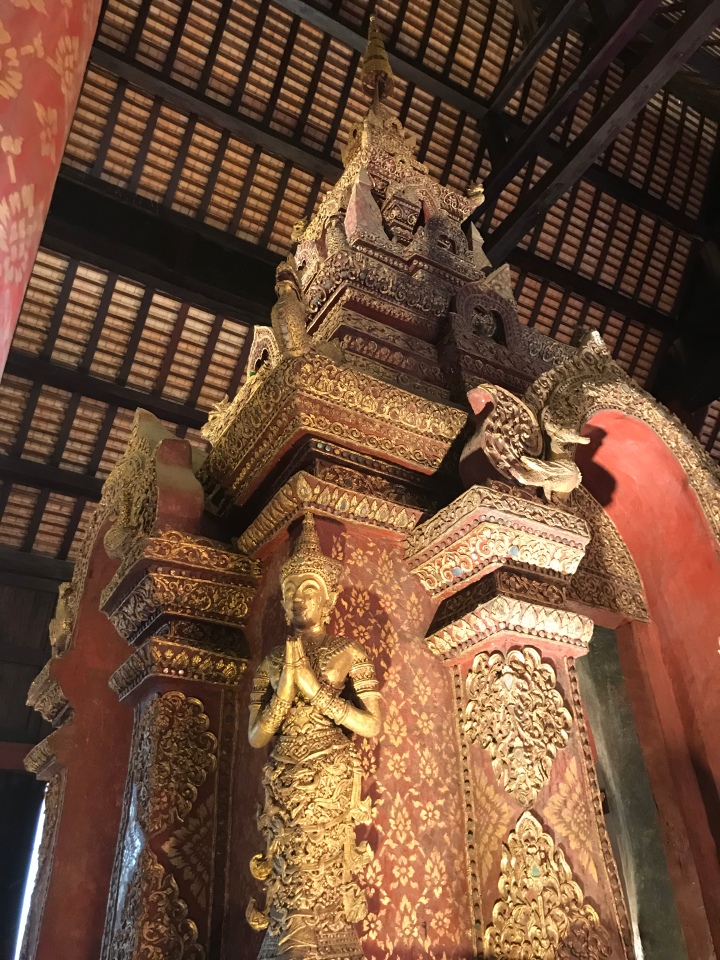 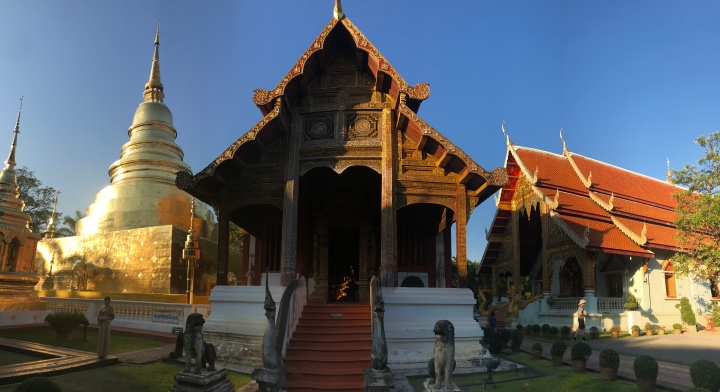 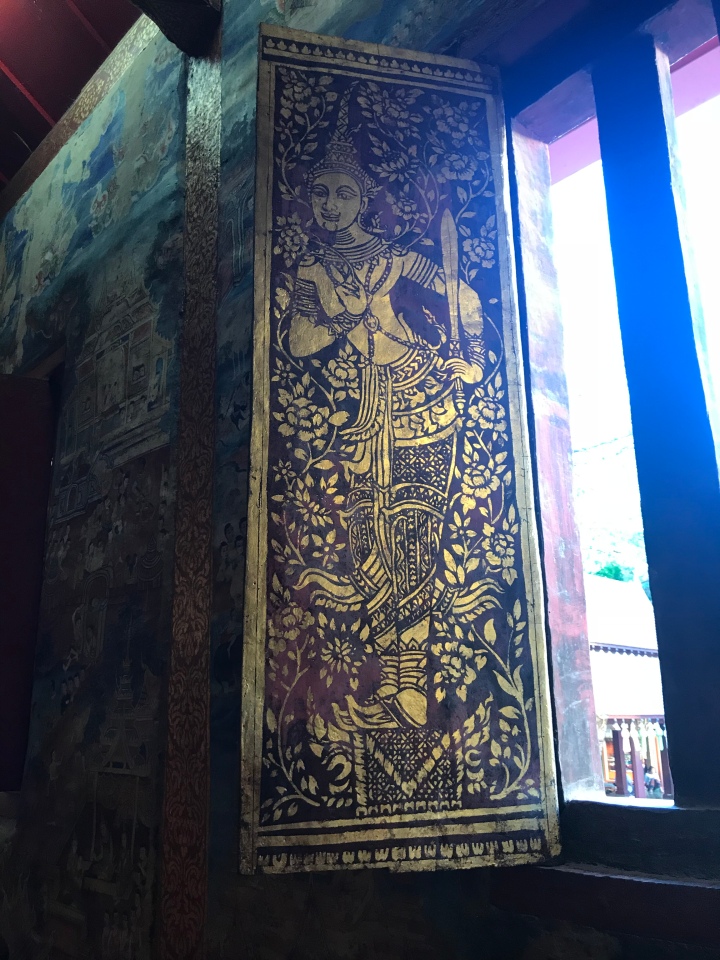 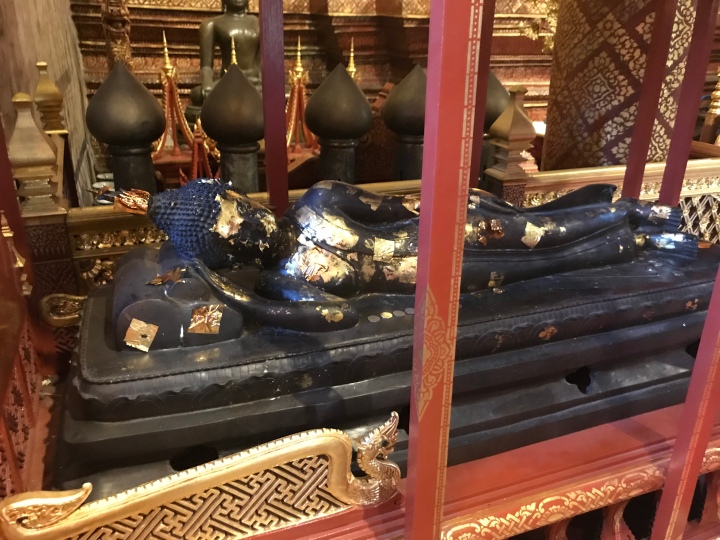 So much detail and golden Buddha’s

After, we started walking down the major road. On Sundays in Chiang Mai, the road turns into a giant street market. Folks are selling elephant pants, elephant paintings, food, soap, foot massages, and galore. We took our time wandering 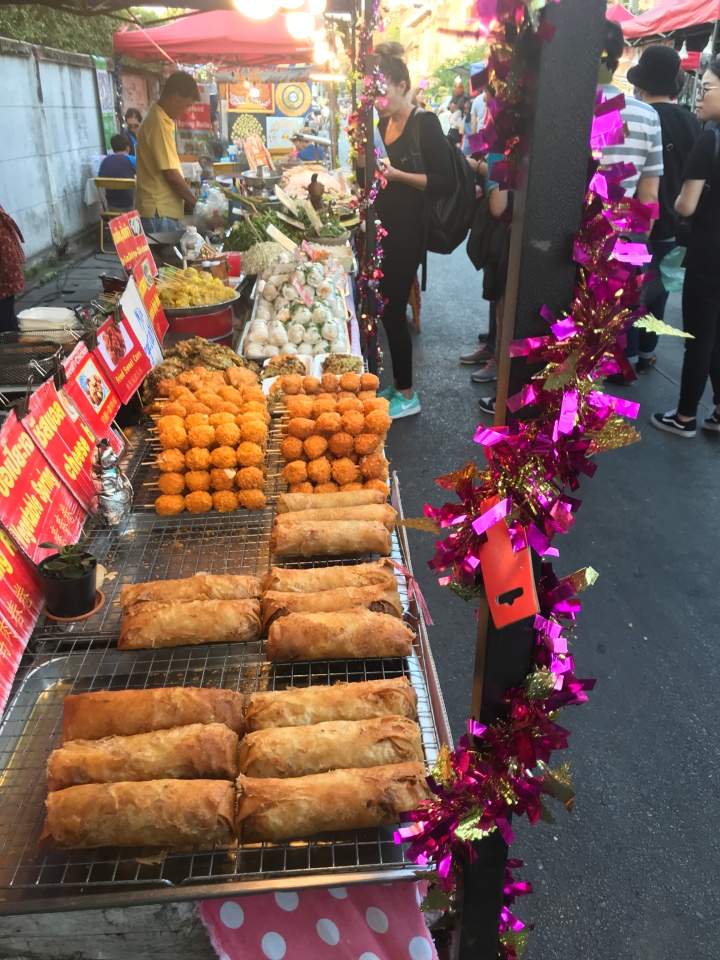 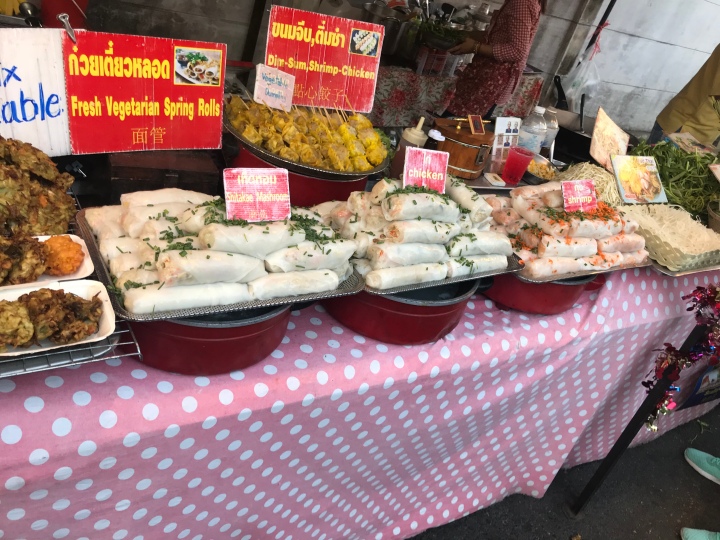 We got a bit of street food, eating delicious sticky rice and fresh coconuts. Eventually, we made it to the 2nd temple on my list: Phrat That Chedi Luang. It was not as nice as the first one: 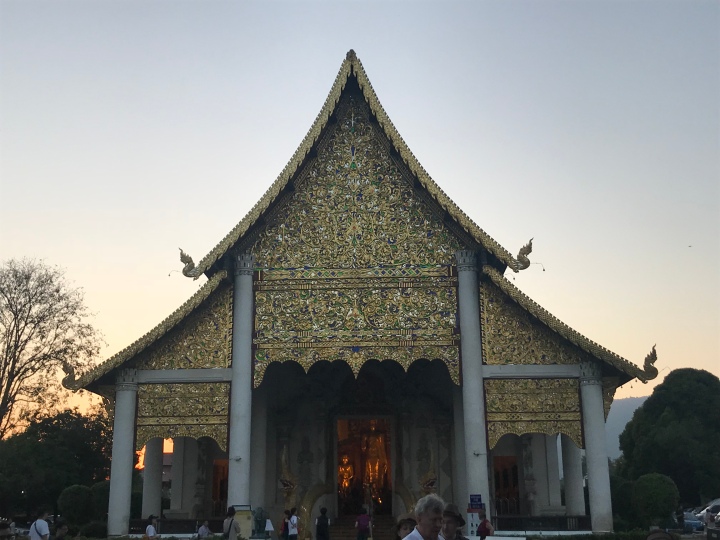 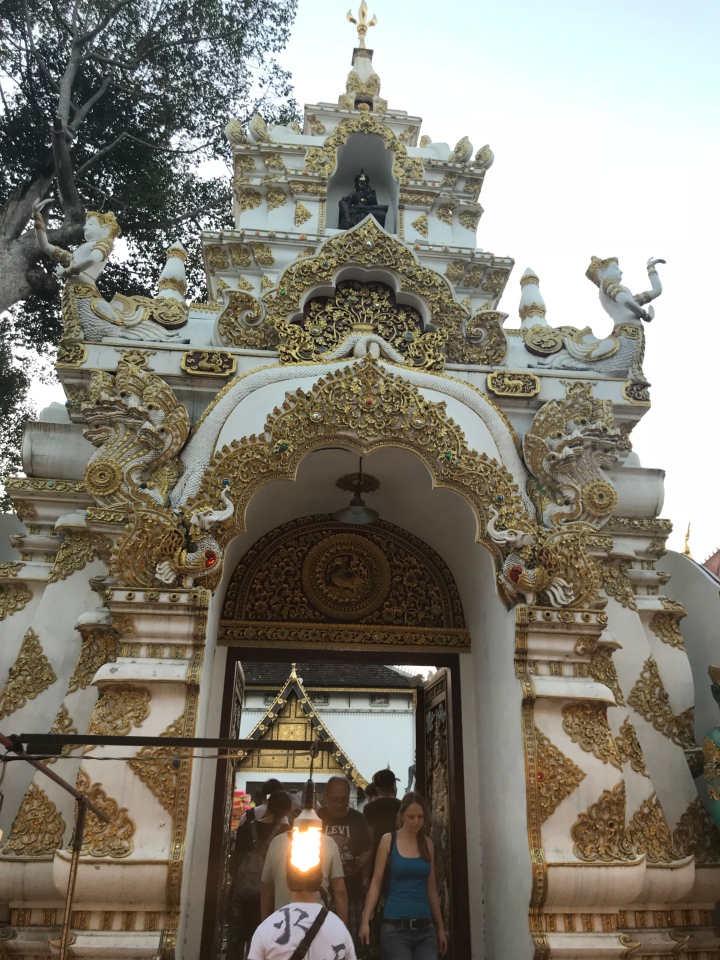 We eventually got hungry and got some delicious food. What amazes me was that so much if Chiang Mai was ready for the Chinese tourists

Dianping is the Yelp of China. So many restaurants had signs that signified they were highly rated on Dianping.

Ctrip is Expedia, Kayak, hotels.com, google flights, and any other flight/train/hotel booking app you can think of China. So many hotels and restaurants had signs saying “find us on ctrip”

WeChat pay and Alipay are like the Apple Pay of China. Except EVERYONE uses it and no one uses physical cash, credit cards, or debit cards. Like, I use WeChat pay every single day. Unfortunately, only Chinese nationals can use the app to pay outside of China, so I’m stuck still using physical cash. 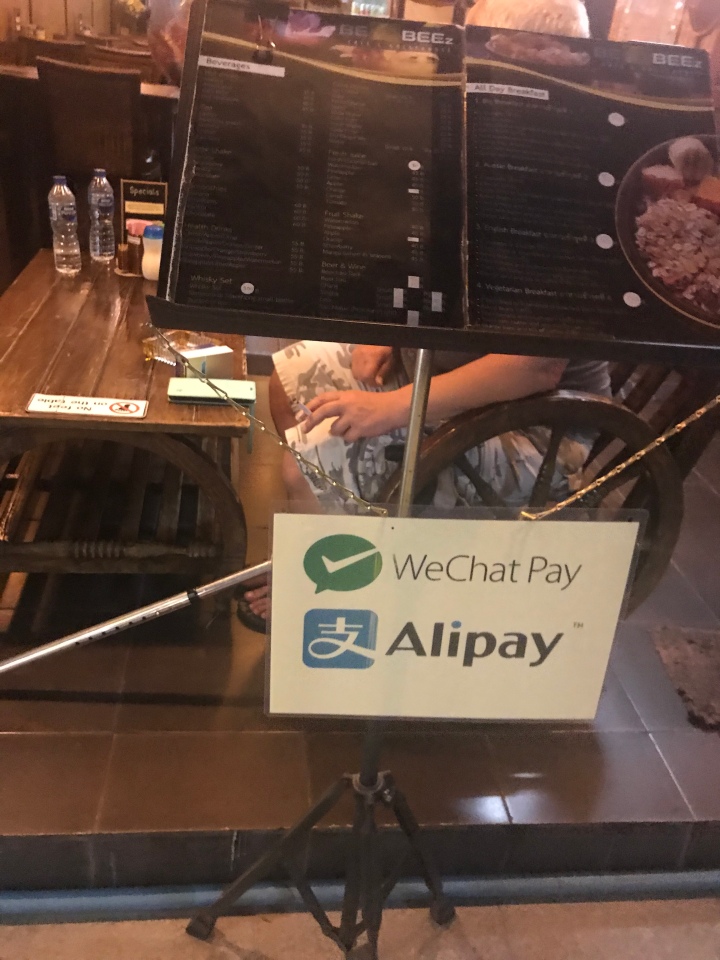 Chiang Mai was ready for us.

We got pretty sleepy and went to the Thapea Boxing Stadium to purchase tickets for our second night. We noticed there was a bottle shop inside, so we proceeded to get beers. Naturally, Boyfriend made good friends with the owner who started recommending beers for us to try. This always seems to happen on our trips. We find a brewery or a bottle shop. Boyfriend talks them up with his beer knowledge. Owner/worker is impressed. They talk the rest of the time about beer

On our second day, we were off to the Elephant Nature Park

Y’all. Elephants are a little scary. Baby elephants that is.

So, adult elephants are pretty tame, but I learnt you should never be behind one and should rarely touch one. If they allow you to touch them, it’s likely because they have been abused and trained to allow you. We were only able to touch the elephants at the Elephant Nature Park that were either blind or really really old (so they really didn’t care)

Baby elephants on the other hand, are small and cute but they don’t know their own strength. They want to play with you but they think you have the same strength as you. So they are likely to ram you and break your rib cage. They also can run up to 40 kmh. So interesting

Anywho, we spent all day at the Elephant Nature Park, learning about the elephants, and sometimes feeding them, and always running away from the babies 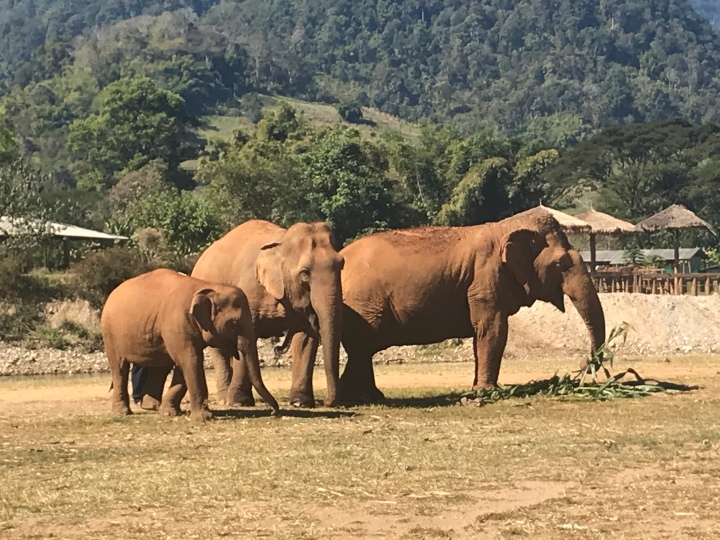 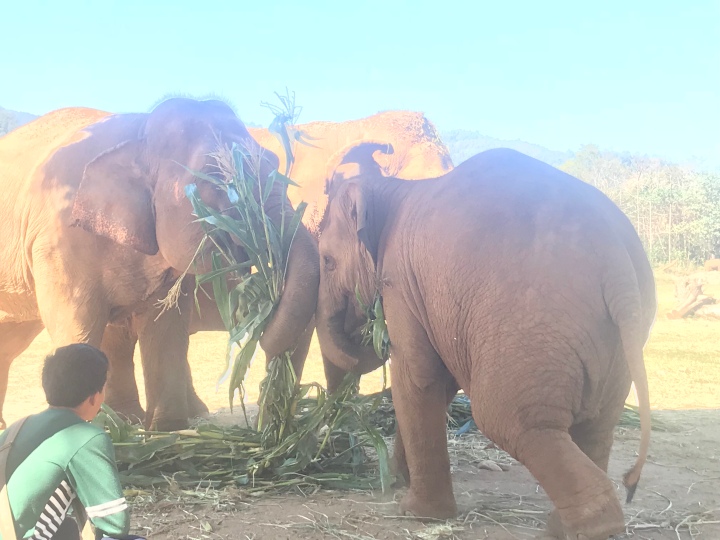 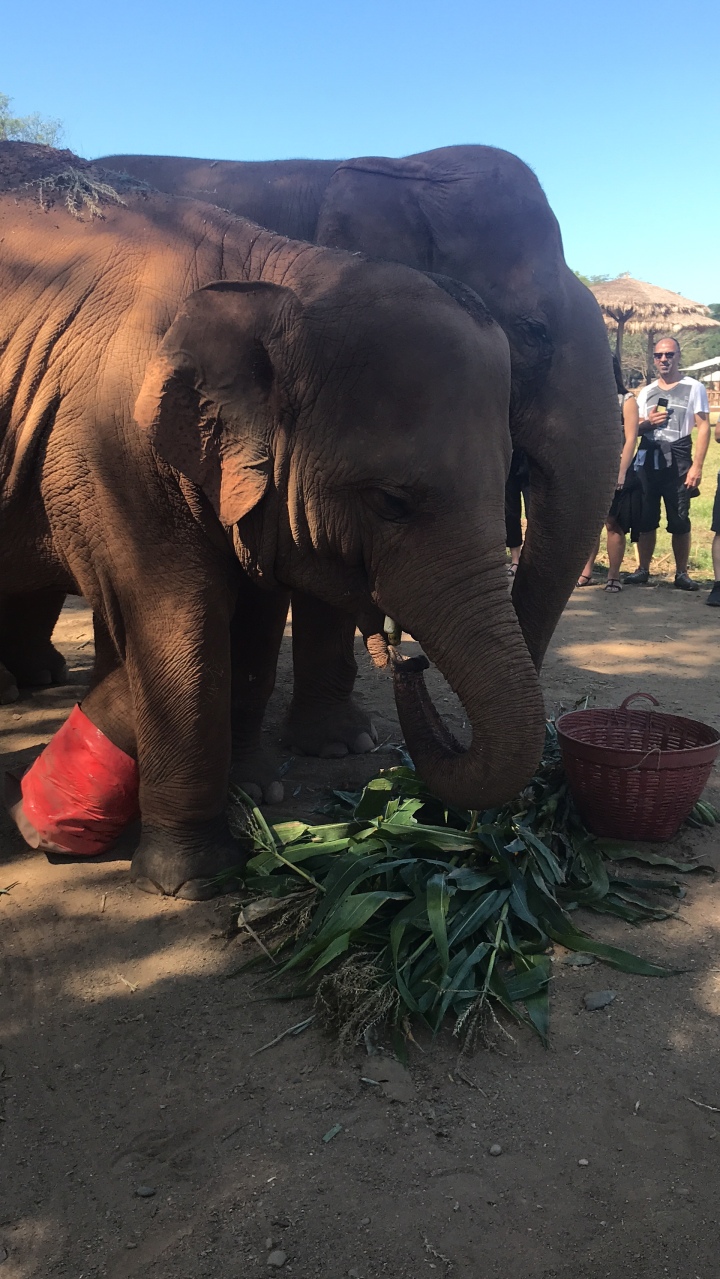 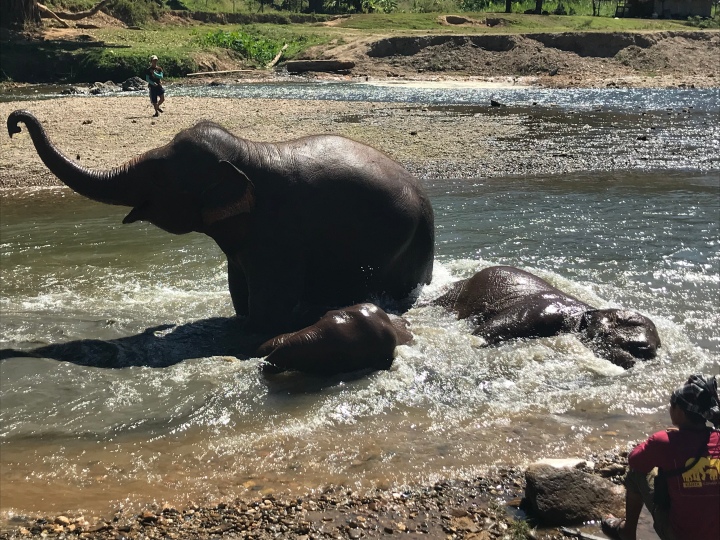 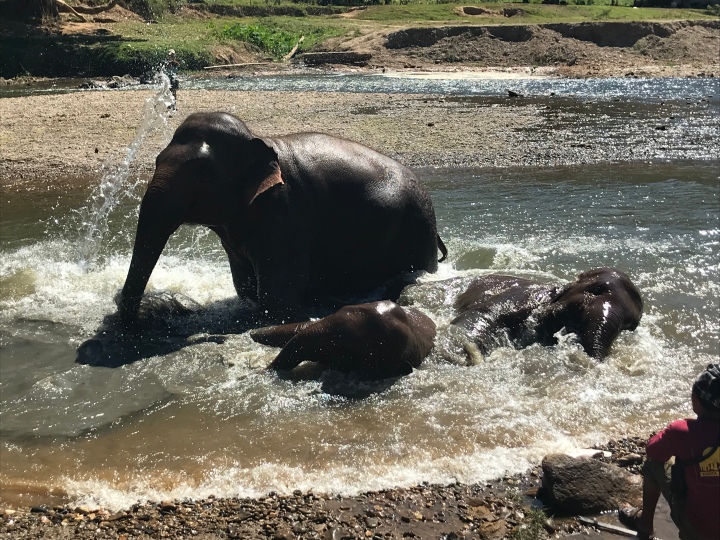 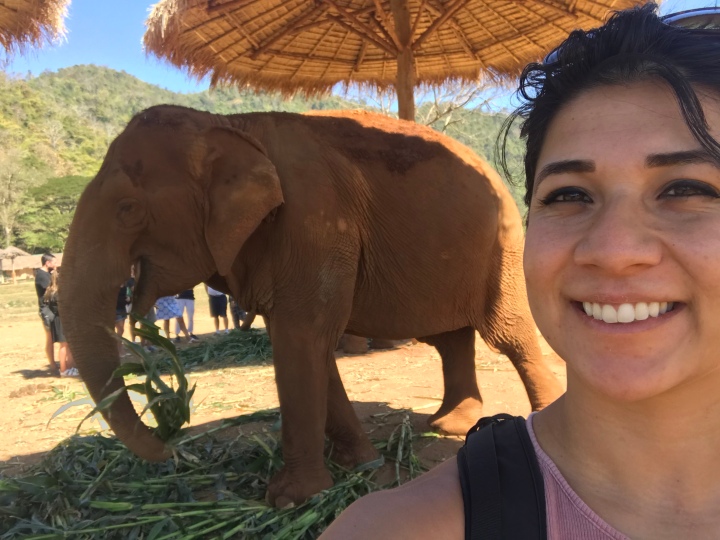 The park provided a delicious lunch for us and after 7 hours, they drove us home. I slept the entire way back to our hotel

Once in our hotel, we enjoyed our rooftop pool for a little bit but it was SO cold. It was ~33C outside and like 15C in the water. What’s that in Fahrenheit…..95F vs 65F? Maybe. I’m writing this on a plane so I don’t have WiFi

After a bit, we got dinner at one of the outdoor restaurants next to our hotel. I got this AMAZING tamarind soup. It was so hot but amazingly delicious 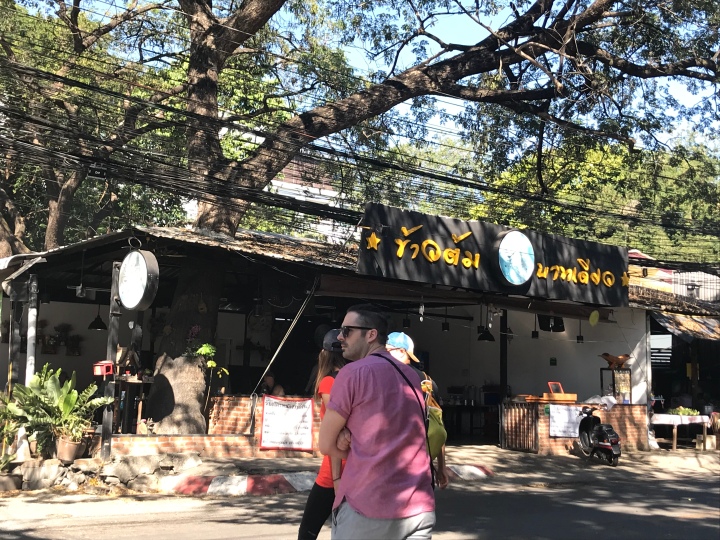 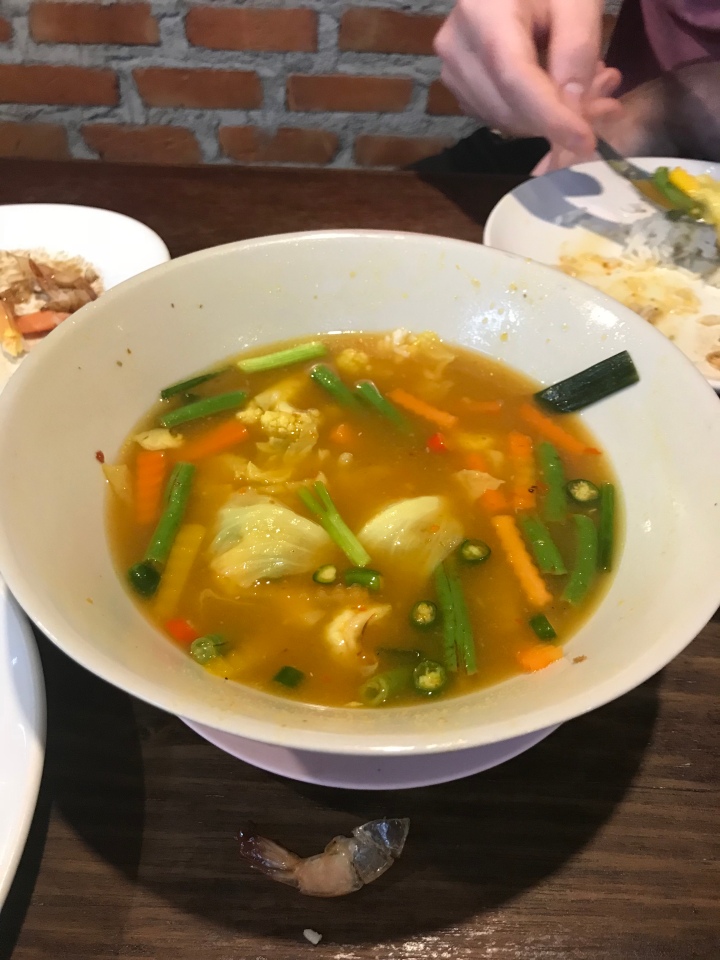 I put this hot chili/garlic/vinegar sauce and downed this thing. After, we got a tuktuk to the bottle shop we were the night before and drank before the Muay Thai boxing fight

It was my first time seeing a Muay Thai fight and it was exciting. Boyfriend is obsessed and is even doing boxing in Shanghai. It definitely got me wanting to spar again 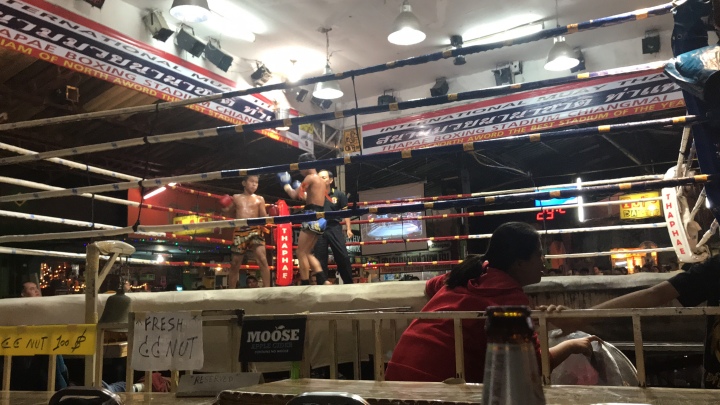 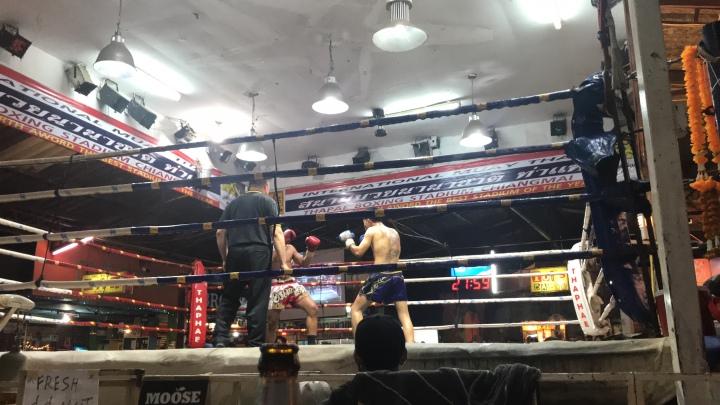 It was pretty awesome to watch. The older woman fight was bad though. There was a Canadian women who was clearly 5’10” fighting a small chubby Thai woman who was 5’4″. It was obvious that the Canadian woman was going to know the Thai woman out, and that’s what happen. 3 of the 5 fights ended with a KO. It was so much fun

After, we went back to our hood and drank/ate some more. We were staying in the university area, so lots of cool bars we checked out.

Today (our 3rd day), we started early. Checking out and then walking to the bike rental. Boyfriends friend went to Chiang Mai years ago and always talked about how much fun he had on the motor bike

It was not fun

After one hour of being able to go straight and practicing left turns (didn’t even make it to right turns), we decided “I don’t want to do this anymore” and returned the motorbikes.

But. We got Mobikes. Because apparently Mobike expanded to Thailand (which gives me good hope for our other cities we’re going to). Boyfriend and I are much more comfortable on bicycles then motorbikes, and cycled all the way to the the inner square and weaved in and out of cool neighborhoods and streets. We got to see some unique temples that weren’t on any tour maps

After, we ditched the bikes to walk around the city some more. We got some Burmese food for lunch and it was hands down the best dish I had all trip in Chiang Mai 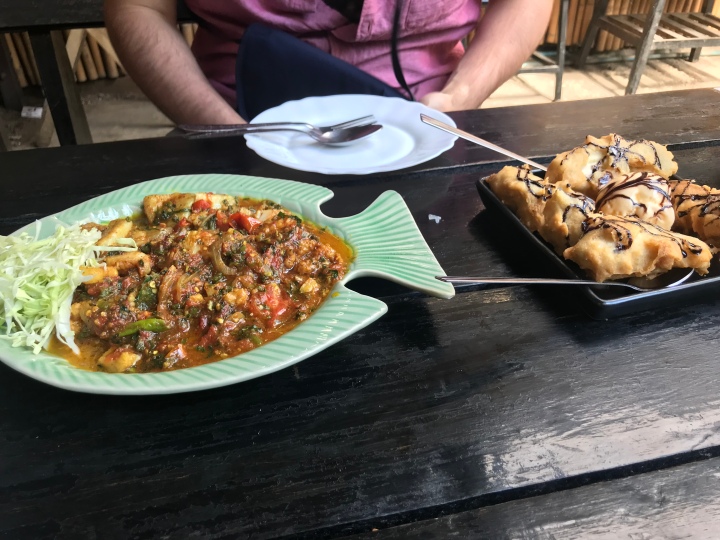 This was the best dish, second best was the Chiang Mai sausage we got on the street, which is essentially a Thai meal in a sausage with all of the spices. Third best was the tamarind soup.

After food, we got a tuktuk back to our hotel and grabbed our bags. We headed to the airport, where we were way too early. That airport is SMALL. And crowded. And super narrow. We got in and got foot massages to a) kill time b) be able to sit down and c) because we really wanted to

Now, I’m sitting on a plane to our next destination 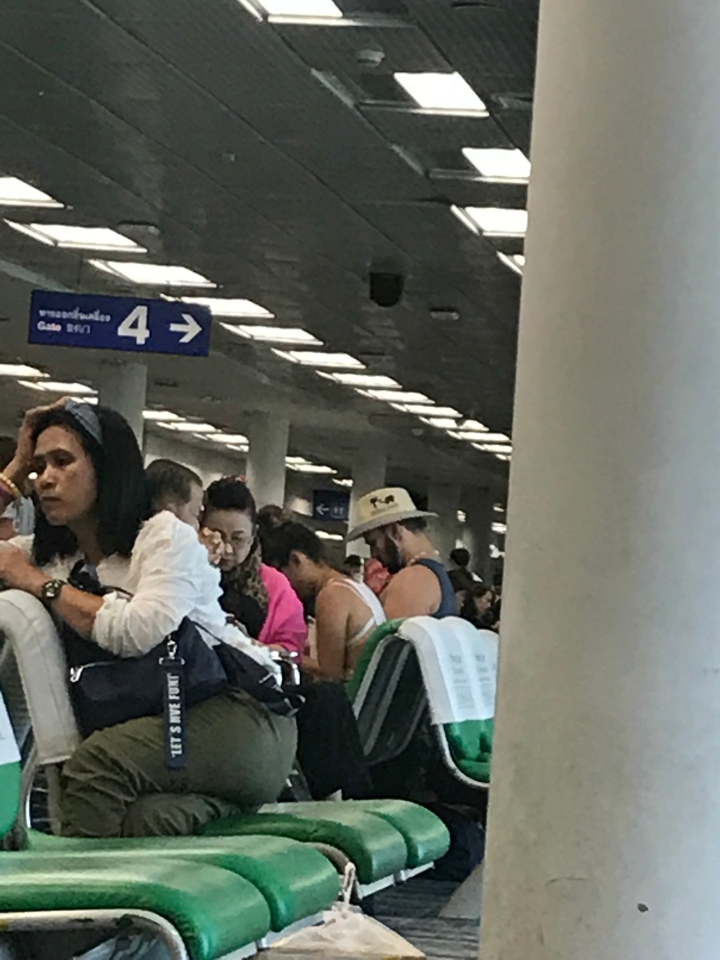