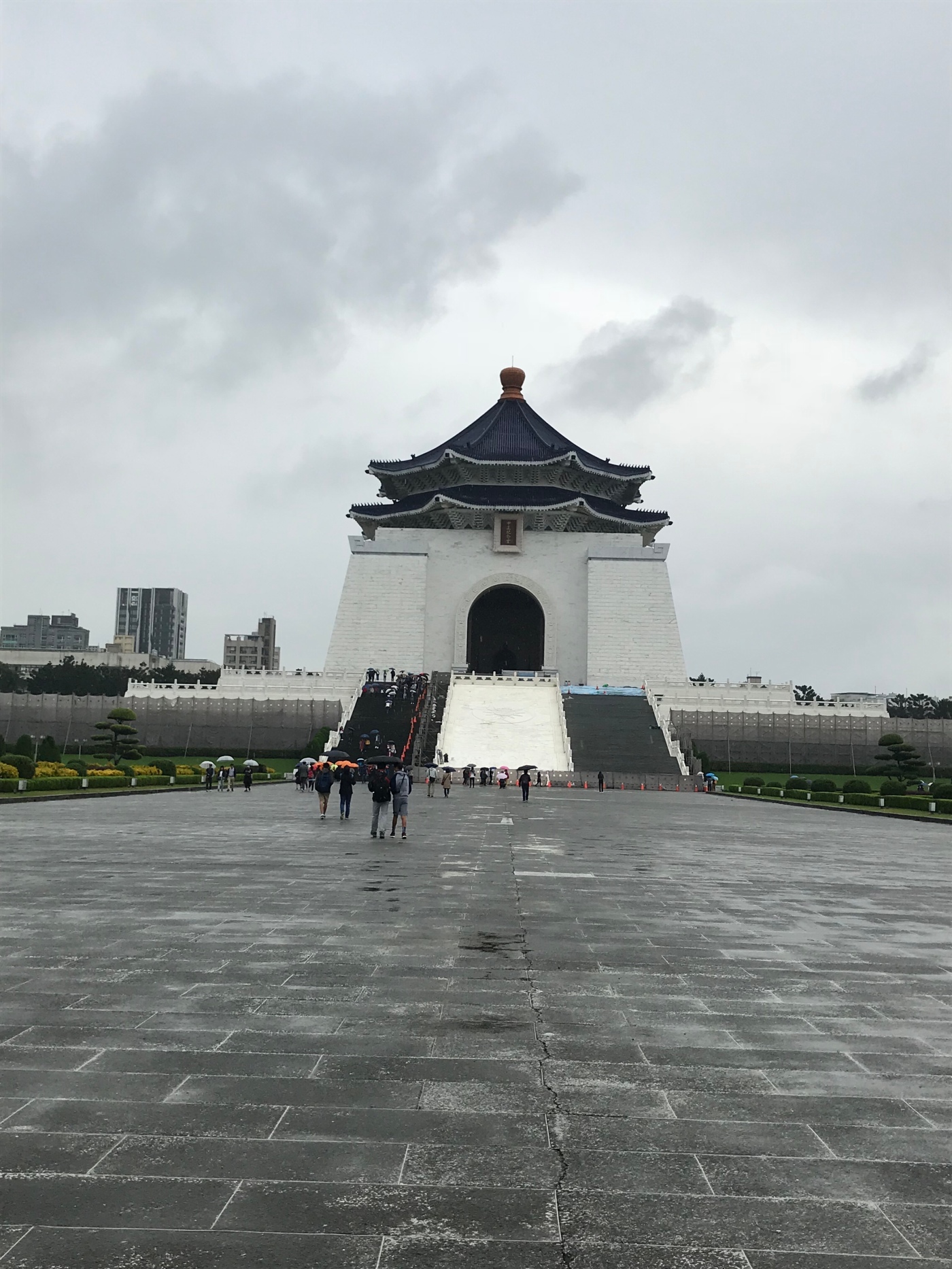 It didn’t go well, to say the least.

This past weekend, Boyfriend and I spent 3 days in Taipei. The day before we left, Boyfriend was throwing up a lot, and we didn’t think much of it.

He’s got a strong immune system. In the entire 4 years I’ve known him, he’s only gotten sick once. So we thought “Oh, it must just be food poisoning, no big-gee”

It was a big big-gee.

I was already running late all day. I was out sick on Wednesday with a cold that I had been fighting for weeks. On Thursday, it was go go go. One meeting to the next, running around trying to get all the questions answered before I left for the long weekend. My afternoon had 1 meeting that caused a domino effect, every later meeting ran later.

I received a text from Boyfriend at 5:45 pm saying “I’m here at the entrance. Where are you”.

Crap. I was late again. I sent the last important email of the day and literally ran to the metro stop 3 blocks from my office (which includes crossing the 5 way intersection). I can say with certain, running with a rolly bag luggage is AWFUL. Just don’t do it.

We woke up on Friday quite early and headed out the door to get the day started. We stopped by a little joint for our first taiwanese meal, Taiwanese omelette:

It basically reminded me of the chinese jian bing, but deconstructed, sauces were put as side dishes and there wasn’t any presense of lettuce or greens in the dish itself.

After breakfast, we headed to jump on our first ever ‘Hop on Hop Off’ buses. These are the red double decker buses that are all over the world to take tourists to touristy locations. I’ve seen them in Barcelona, Shanghai, Berlin, Rome, etc and Boyfriend and I usually dont use them. To be honest, Boyfriend and I usually steer clear of touristy things, only going to the really important ones and avoiding museums. However, we wanted to do this in Taipei so we could go to some museums to learn about ancient Chinese culture.

But in our excitement, we woke up an hour early and the bus hadnt started running yet. So we walked down to Chiang Kai-shek Memorial Hall.

It was slightly drizzling as we were exploring, but not bad. The main road that runs through the memorial hall to the gate and grand theaters is called “Democracy Road”.

After, we tried finding the Hop On, Hop off bus, but couldnt find the stop near the memorial hall. So we ended up walking all the way back to our original location, running to catch on the bus.

Once on the bus, we went the Palace Museum, which contains thousands of artifacts that were evacuated from mainland China during the Chinese communist revolution. Boyfriend I were expecting to see artifacts, artwork, statues from the time closest to the evacuation, but just saw things from 500 BC to 1500. Interesting, but not at all what we were expecting 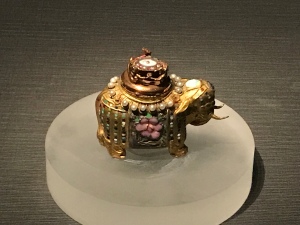 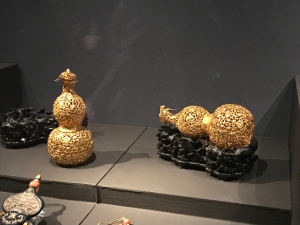 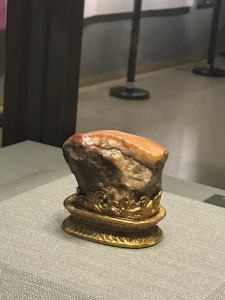 After the museum, we jumped on the HOHO bus (hop on, hop off) and YongKang road, which is a famous food street. However, we went after lunch and where there was some lul, so not much food activity. but we did get these amazing egg/meat stuffed breads 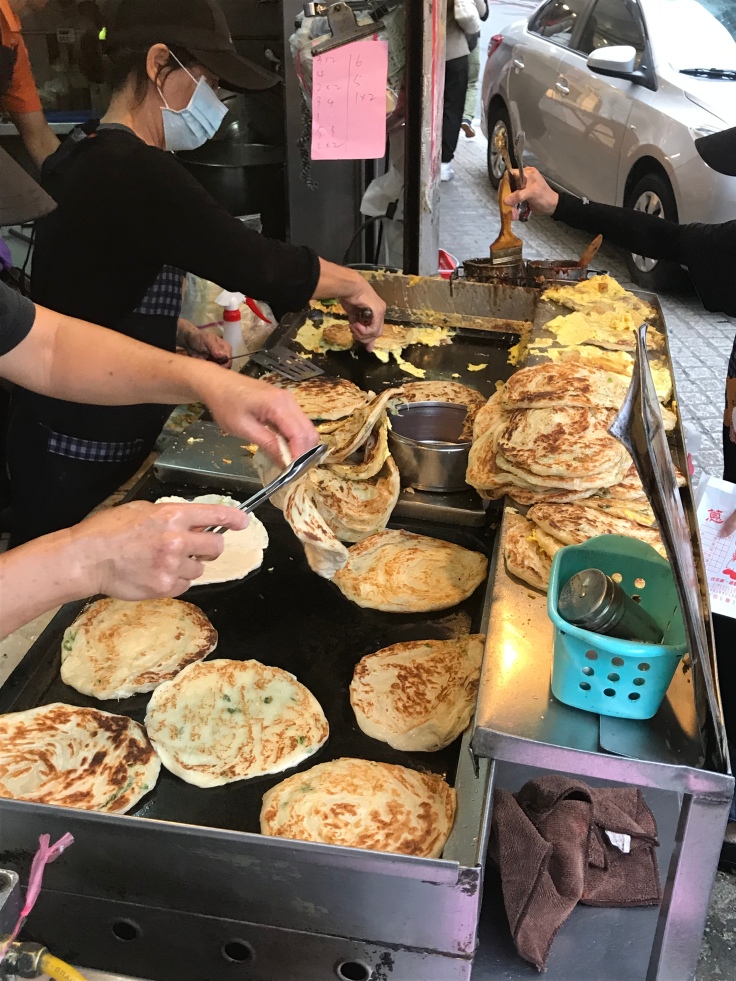 After this, we sat on the bus and went around Taipei, sight seeing. Got a really good lay of the city and even got to see Taipei 101

After this, we jumped off the bus and walked around the city. We made our way towards Mikkeller, but first ran into this amazing shop. It had every type of container you could think of: glass, plastic, tin, spray bottle, medicine bottle, perfume bottle, fancy lotion bottle, etc. Boyfriend and i spent a solid 20 mins buying random bottles we didn’t need/really really unnecessarily wanted. I now have 2 really nice glass-looking containers to take on our travels for lotion, but are 100% plastic. Chica chica yeahhhh!

After our time at the store, we made to Mikkeller Taipei. So far, every Mikkeller that has exist in the city we explore, we visit (Seoul, Tokyo). Had some solid beers here

After having a few beers and being thoroughly satisfied, we made our way south to Driftwood.

Driftwood is a place that Boyfriend heard of that served this great beer from a brewery he got recommended to check out while in Taipei. Needless to say, Boyfriend is smoozing it up with this beer-curator (yes. this is a thing. Yes, he is doing this) here in Shanghai and was recommended to try Taihu Brewery. We spent a few hours here, enjoying the super-hipster hotel/art deco of the restaurant, drinking great beer, and playing jenga:

After Driftwood, we wandered through Ximending, a pedestrian shopping area before eventually making our way home.

Saturday. My day of Doom.

i woke up really late (bad sign #1) and we didnt head out the door till 12 pm. We made our way towards a Beef Noodle restaurant my cousin from Taipei recommended. Unfortunately, it was closed (bad sign #2)

We got some random beef noodle to squash our hunger (bad omen #3). We headed our way to Taihu Lab Brewery in New Taipei.

We took the metro out and walked about 30 mins before reaching the brewery, just to find it was completely closed (as in they were removing seats/tables from it). Joyous. So we ordered a taxi to get us back to the metro so we didnt have to walk the 30 mins back to the metro stop. We went to City hall and checked out the taproom in the Breezeway.  This is where my troubles started.

I was in a lot of pain and could barely stand. While at the Breezeway, i hunched over and sat on a giant barrel crate (they didnt have any seats at this location). And i barely had 2 beers. Boyfriend picked up some beers to take back to Shanghai (1 for his beer-curator, the rest for ourselves) and wanted to drop them off at our hotel before heading out again.

We stopped at the hotel room, and, my body gave out. To say in the lightest of notes, diarrhea occurred. I was feeling gross and took a 1.5 hour nap before i could “go out again”. And i pushed myself. i was looking forward so much to trying out taiwanese food and checking out the night markets.

We headed to one of the night markets, where i could barely stand. Boyfriend got a fried chicken from Hot Star that looked great, but made me want to barf:

I still couldnt stand, and then I proceeded to vomit in the streets of Taipei. Apparently, I was very classy. I blocked myself off so no one could see me, i chose a location where no one could hear me, and i puked into a very small area that had a drain, so i didn’t leave a huge mess.

BUT I STILL PUKED IN THE STREETS OF TAIPEI.

After puking a lot, I was feeling a bit better. So, we went to check out the Snow King and the 73 ice cream flavors they served.

The Snow King was on a street that had very few street lights. The store itself would have been EXTREMELY easy to miss if i had not seen a photo of the door on the Smart Local.

Once we walked up the stairs we found the most pleasant ice cream shop and was asked what of 75 flavors did we want to try. They had anything from walnuts to pistachios to mango to pork floss. How could you only get one??

So we split 4: Mango, Banana, Coconut, and Peanuts. Surprisingly, Banana was REALLY delicious (and I usually am not a fan). Peanuts was a perfect level of nutty and creamy. The coconut was creamy, but unfortunately did not have any bits of coconut in it (which i love). The mango was meh after the other 3.

After some ice cream, we made our moves towards another night market (around 7 pm). But I was starting to feel worse and could barely stand. I was only up for 5.5 hours this day

So we went back to my hotel, where I vomited and had more diarrhea and continued to until we left for Shanghai on Sunday. Packed up and got on the metro to the airport, got on the plane and SLEPT the entire plan ride. Got to Shanghai and went straight to sleep. Turns out Boyfriend had stomach flu and gave it to me while I already had a weak immune system after being sick for so long. Great…

I unfortunately did not get to see as much of Taipei as I wanted to, nor did I eat as much i wanted to (it is a city known for its food!). I had a total of 2 meals + 3 snacks in my 3.5 days there. I did have a lot of liquids, but nearly not enough.

I’ll just need to go back to Taipei.