Somehow, it always rains wherever Boyfriend and I go; Seoul, Tokyo, Osaka, Taipei, Nanjing, Suzhou. So naturally, it rained on our long weekend in Vietnam

We left early from Shanghai, catching a Didi (chinese version of Uber) at 4 am to catch our 6:45 am flight. It was pouring rain in Shanghai, so I was just excited to get to some form of heat. We had a 3 hour layover in Guangzhou before we finally landed in Hanoi.

Hanoi. What to say. It was hot (~30C) but not sticky. We got a taxi directly to our hotel, and dropped off our things. Our room was MASSIVE. We had a California King size bed with a couch, kitchenette, and nice size bathroom all for 400 RMB (about $57 USD).

We dropped our things and then headed out the door for the bus stop. We were looking to find a)where it was and b) how long it took us to walk there. When we got there, we bought our bus tickets for 7 am the next day and then headed downtown

To get to downtown from where we were staying, we had to cross the Red River. There was 1 pedestrian bridge we thought that we could cross. It was terrifying to say the least

Right before we got on the bridge 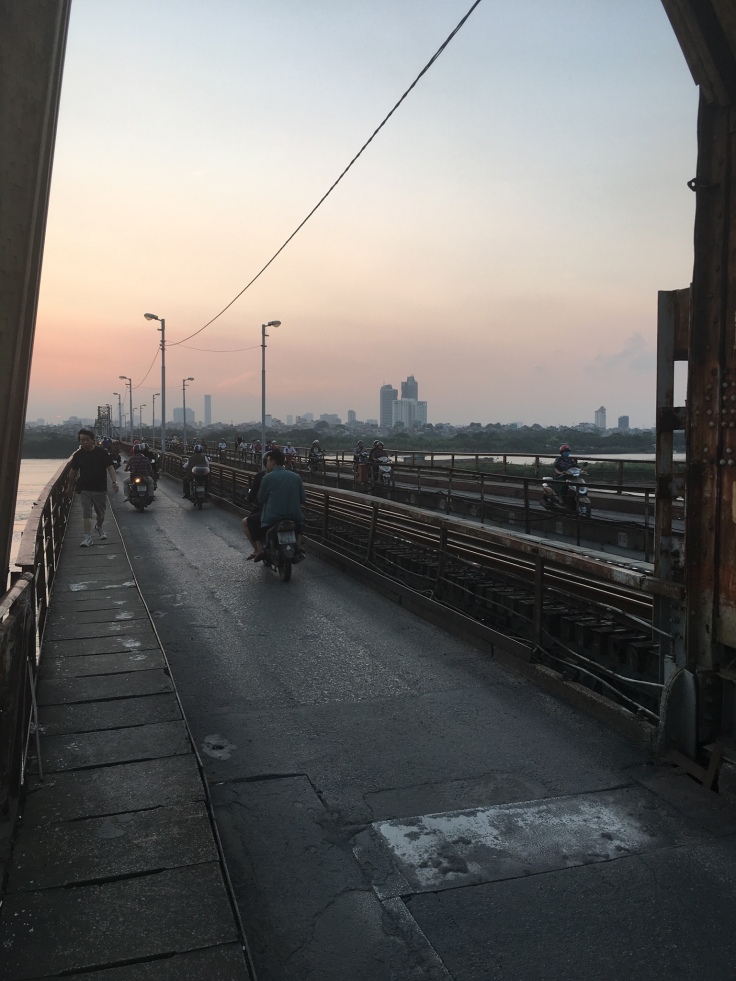 Basically the Long Bien Bridge was my death trap. We were walking on what felt like a very narrow pedestrian path with thousands of motorbikes zooming past us at high speeds, a very low hand rail that was high as my waist, and a not solid path. The path was made up of thousands of concrete slabs that looked like 4 inches in height, not drilled in but solely held in place by the bottom rail that was under the concrete slab. In some places, there was a large erosion from the slab that I’d be scared I’d trip on to my death. In other places, the slab wobbled as it was getting smaller from erosion. In other places, there was a large gap between this concrete slab and the next.

So what would probably have taken a normal person 15 mins to cross, I was freaking out internally, squeezing the beer can in my hand with all of my anxiety, as I slowly walked across in ~45 mins.

When we finally got across, I swear I was going to kiss the ground

But luckily I did not.

Shortly after getting in the Old French Quarter, we saw folks all around, wearing Vietnamese gear. At first, I thought it was because it was Vietnam day or some political day (we were in Taiwan on the day of their election as well). We wandered a bit and bought what was a disappointing banh mi. Dry, not enough vegetables, but it did come with a free banana 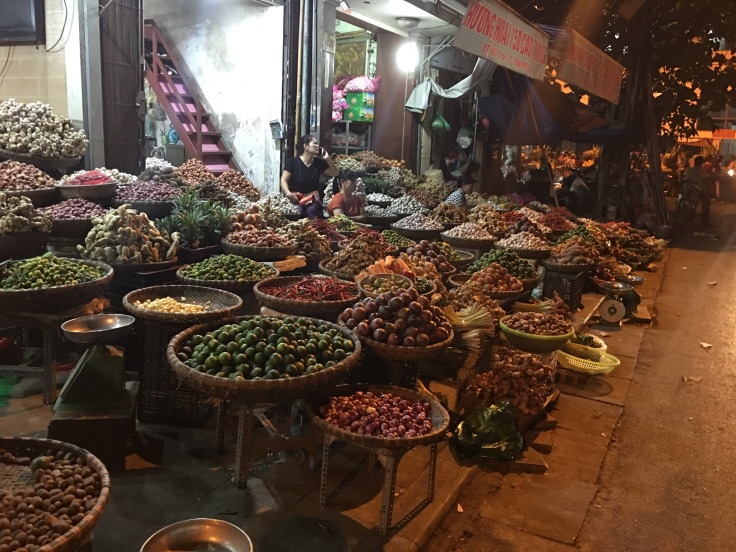 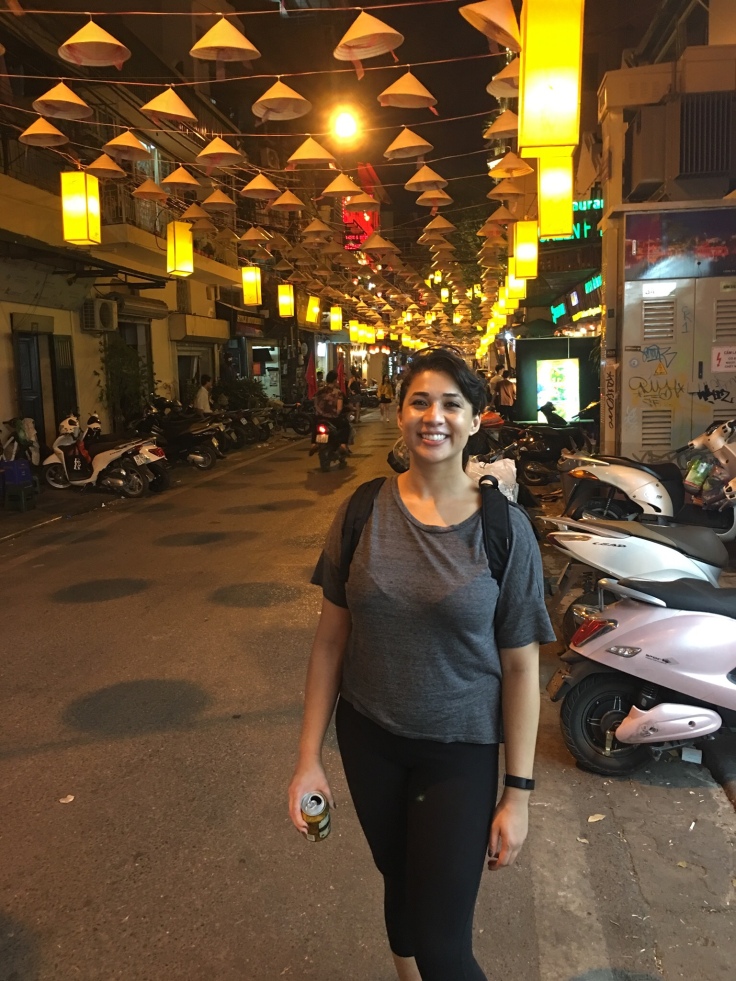 It was great. It was amazing atmosphere and just great food all around

Eventually we got hungry and did what we do, find the most packed restaurant full of locals (i.e. as little as laowais as possible). Laowai in chinese means foreigner. And we found one: on Hang Gia, south of Hang Buom st

Boyfriend and I ordered egg rolls and pho 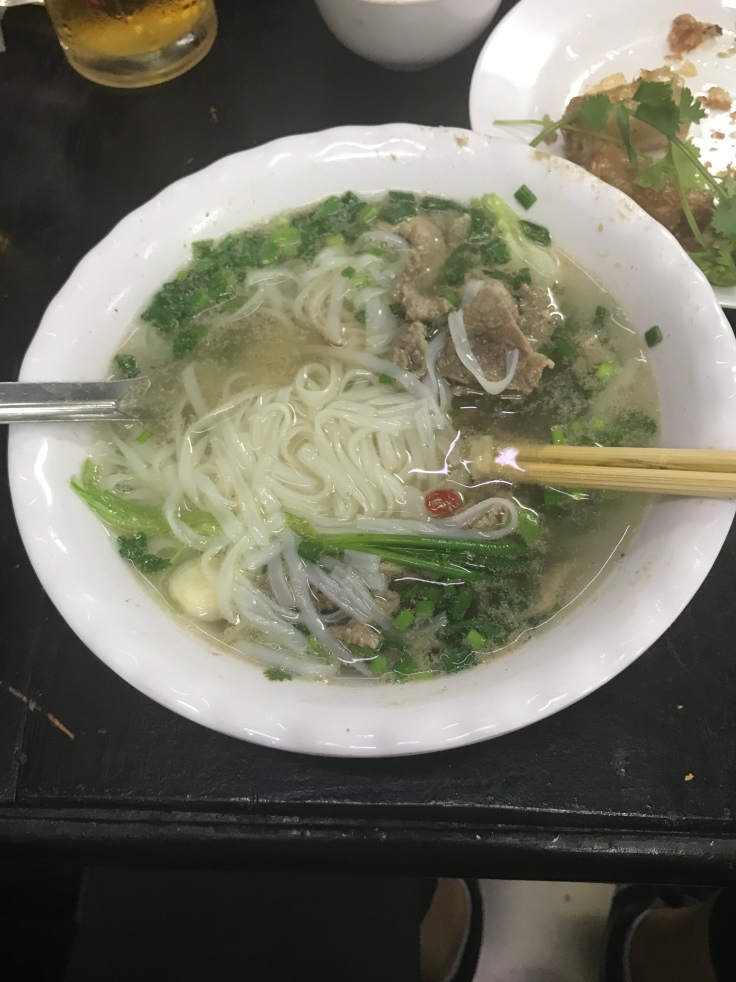 The pho was the BEST pho I’ve ever had. I had many more phos after this bowl, and I can still say this was the best. It was naturally amazing: the broth was well seasoned and you could tell that it had been cumulative flavor over numerous hours, the beef was fresh and non fatty, the noodles had flavor, and there was the right amount of fresh ingredients (chili, cilantro, mint) that it didn’t over power the dish but was a perfect amount. And it cost about $3 usd

After about 20 mins of sitting at this restaurant, the tv changed from the bingo it was showing to the Vietnam vs Philippines soccer pre-game

That’s why everyone was donning Vietnamese gear. The country was in the semifinals and just needed 1 more goal over the Philippines to get into the finals. After finishing our dinner, Boyfriend and I walked around to find a good place to watch the game. The city was packed! 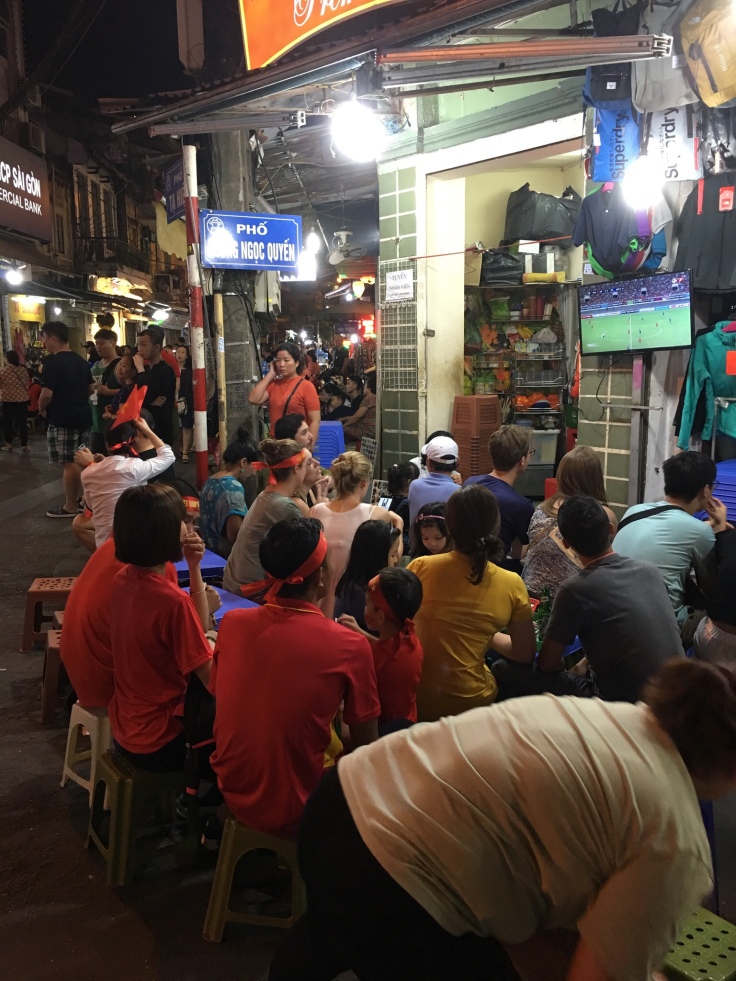 Every where you looked, people were sitting on small stools facing TVs with their Bia Ha Noi (Hanoi beer) and their dinner. The streets were packed and the bars were packed. It was just such a great atmosphere. AND the Vietnamese won

The next morning (Friday), Boyfriend and I woke up and walked to the bus stop we visited the day before. We got on our bus towards Mong Cai, so we could get out at Bai Chay and go to Halong Bay

The bus was about 4 hours and cost us $3 usd per person. And it was entertaining

There was Vietnamese techno music playing and strobe lights going off. The bus attendant would try to pick up everyone off the highway street to get on our bus. That was an interesting thing to see: a lot of people waiting on the side of the highway for their bus. People set up restaurants and quick shops where people would wait, and our bus driver would stop so the attendant could round up as many people as possible

At one point we got to a bus stop and I had to pee. I made Boyfriend aware and the bus attendant and ran to the bathroom. Upon exiting, I saw the attendant running towards me with a motion of “we’re leaving!” He kept going past me so I assumed he was getting someone else. I got out and was about to jump on a bus when I noticed, this is not my bus

My bus was no where to be found. My bus, with my boyfriend in it, with my passport in it, with my money in it. What was I going to do. I started mentally panicking until I saw a whiz run behind the bus towards the bathroom and I realized “that is my boyfriend”

Turns out our bus had pulled out of the parking spot and was waiting behind the bus I was about to jump on for me and the other women in the bathroom to get on. I safely got on and we were backing on our Vietnamese techno way to bai Chay

We got to the bus stop there and jumped into a taxi to the Halong Bay tourist marina. We got to our cruise line dock, where we reconnected with WiFi and enjoyed alcohol until our boarding time. Our bags were brought on and we got our boat.

We were one of two couples on our cruise. The other was a 60+ British couple that didn’t do much. We were orientated with our boat and then showed to our suite

AND OMG IT WAS BEAUTIFUL

Yes. It was stupidly expensive, but it was well worth it. Boyfriend and I work hard and we play hard. And this was the epitome of playing hard

And then our boat was off towards the bay 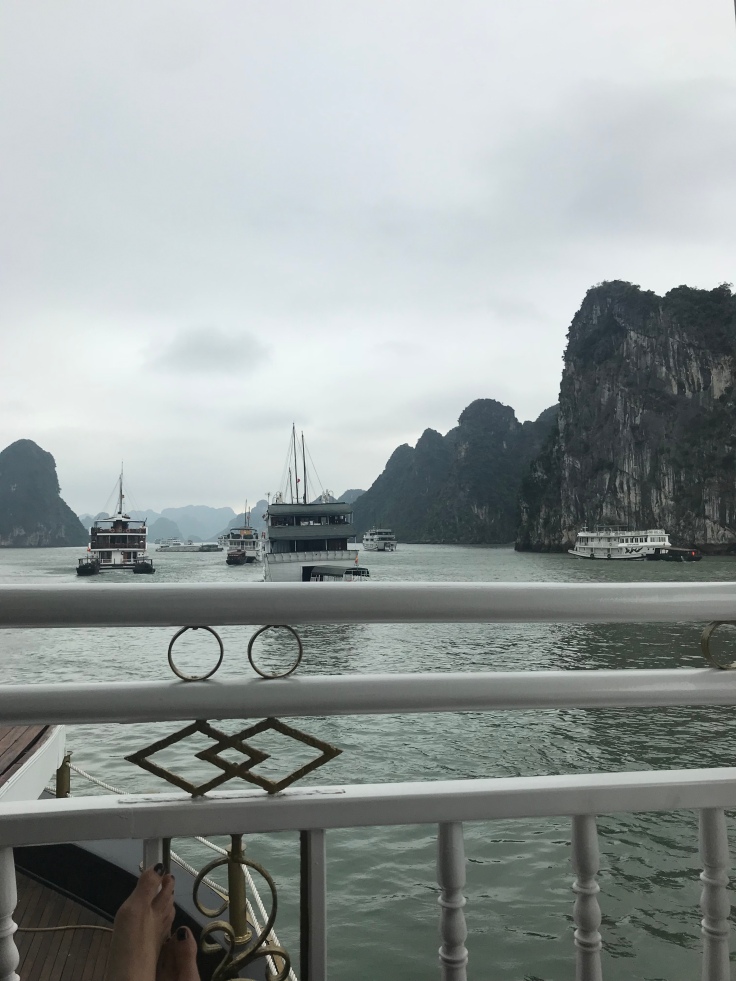 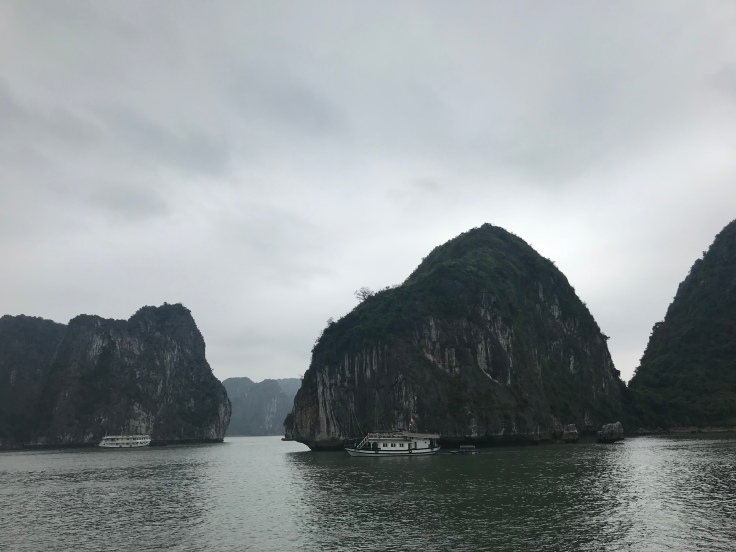 It was gorgeous and wonderful to sit on our balcony and watch.

We got back to our hotel room and I got back out on the balcony while Boyfriend ordered some drinks for us. The waiter came to drop it off and did the funniest thing: he walked directly into the window and spilled all the drinks

Here is a recreation of Boyfriend being the waiter:

I was sitting outside behind the closed door when I heard a loud BANG and the waiter on the floor and the drinks across the door. I felt so bad for him but I also could not stop laughing after he left our room

After the hilariousness, we continued relaxing until it was time to learn how to make spring rolls and then had dinner. We anchored our boat in some cove and spent the night on the water

Waking up the next morning was one of the best wake ups. We left our windows open and could view the beautiful scenarios from bed.

In the morning, our boat took off towards Titop island.

It was slightly drizzling and cold, so prospects of us being able to swim in the bay was little to none. We were bundled up in pants, a rain jacket, and an umbrella for our morning excursion. We climbed about 10 minuted straight up stairs to see a view of Halong Bay 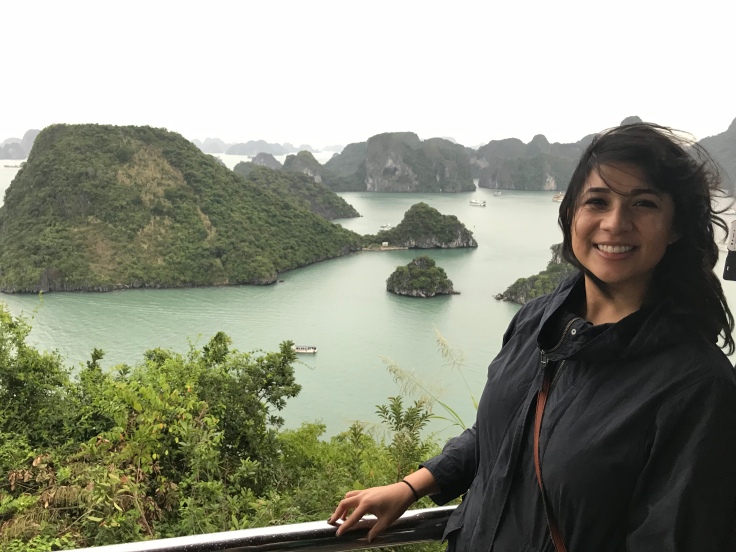 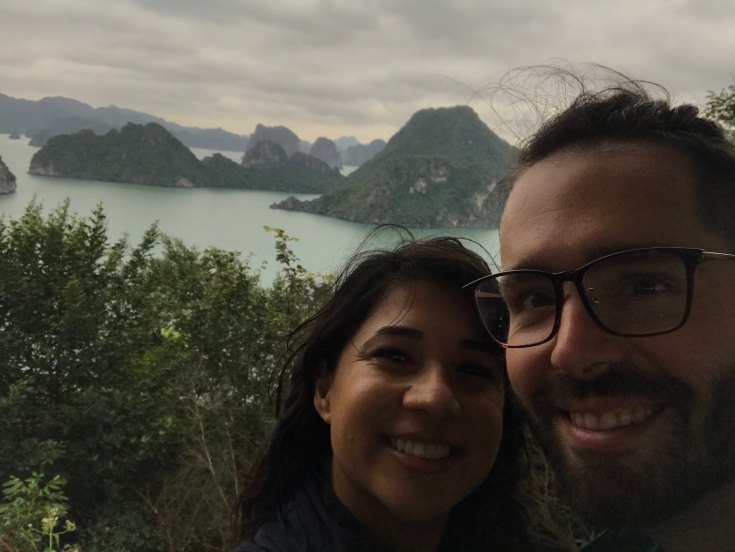 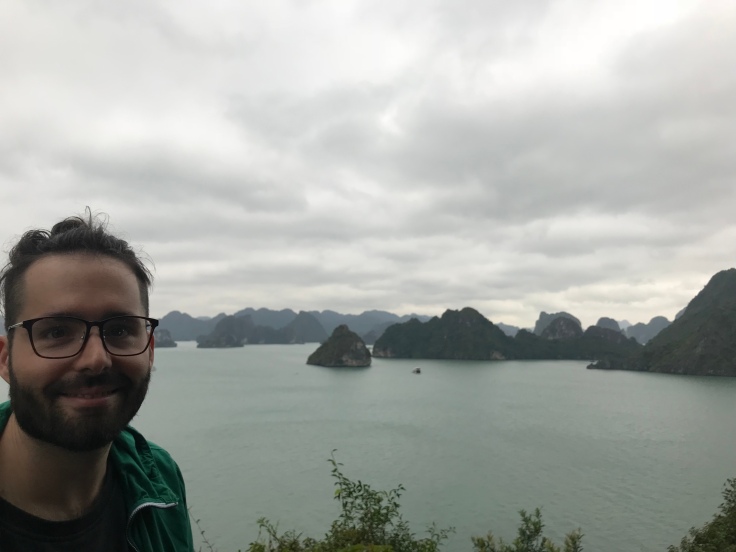 If you can’t tell, Boyfriend has finally grown his hair long enough to put it in a man bun. It’s still short, so it can’t be as far back as he wants it.

After the excursion to the island (where we would have gone swimming had it been warmer), we got back on the boat to relax until we docked back on mainland

Once on mainland, we opted for the more expensive/ more direct route back to Hanoi. We had downloaded on Netflix the remaining episodes of the show Billions that we hadn’t been able to watch since moving to China and watched it the entire way back

When we got back to Hanoi, it started to drizzle. We checked into our hotel and our room. It had the coolest balcony view of the Old Quarter

After we dropped our things off, we went out into the Old Quarters for more food adventures

The banh my was the best I’ve had. It had pate and bbq pork on it. Great amount of flavor, not dry, lots of veggies. All for less than $1 USD

Check it out. It’s on the south west corner of Lo Ren and Hang Luoc. It’s not a store but just a food cart 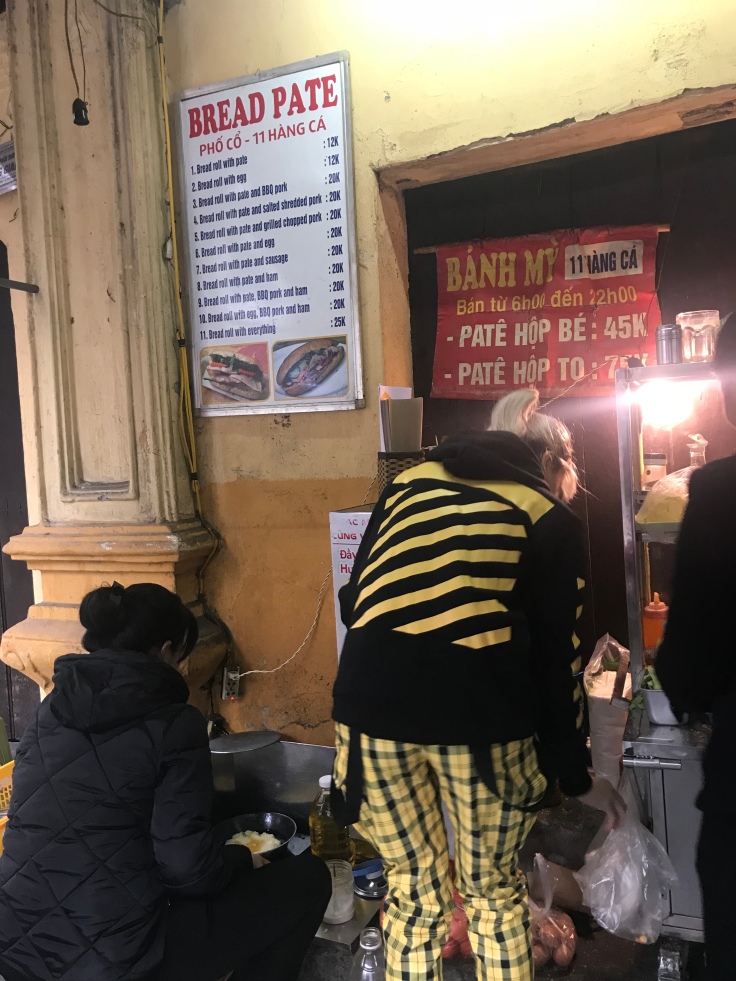 I got the #3 two times over our trip

With some wandering, we walked to the Ho Chih Minh Mausoleum. It’s gorgeous and huge 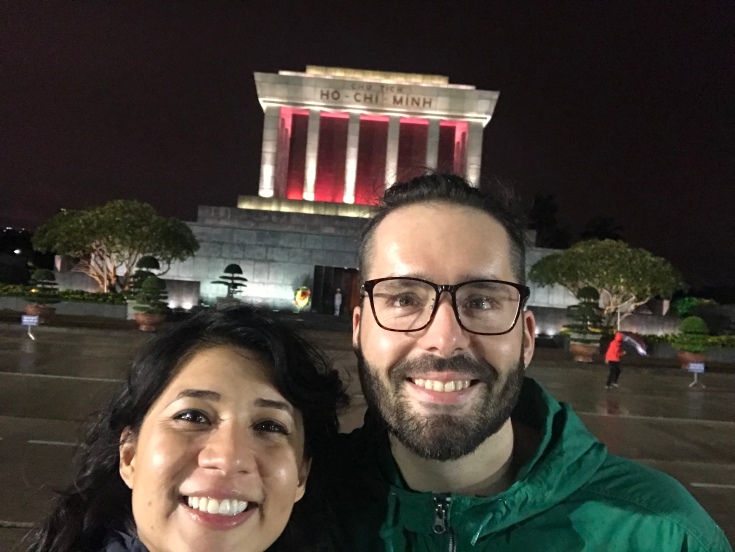 We also found another food street area that was less chaotic. But no food was eaten

After some wandering we ended up at Ibiz hostel, where they had cheap beer and food stools for us to people watch out of the rain. We ended up sitting for hours, making friends with people and celebrating the bartenders birthday, who gave us free beer. We met a guy who had been traveling for the last year across the world and heard his stories. Eventually around midnight we headed home

On Sunday, we woke up earliest and got our bowl of pho for breakfast. We tried to go to the place on the first name but they didn’t serve food at that hour 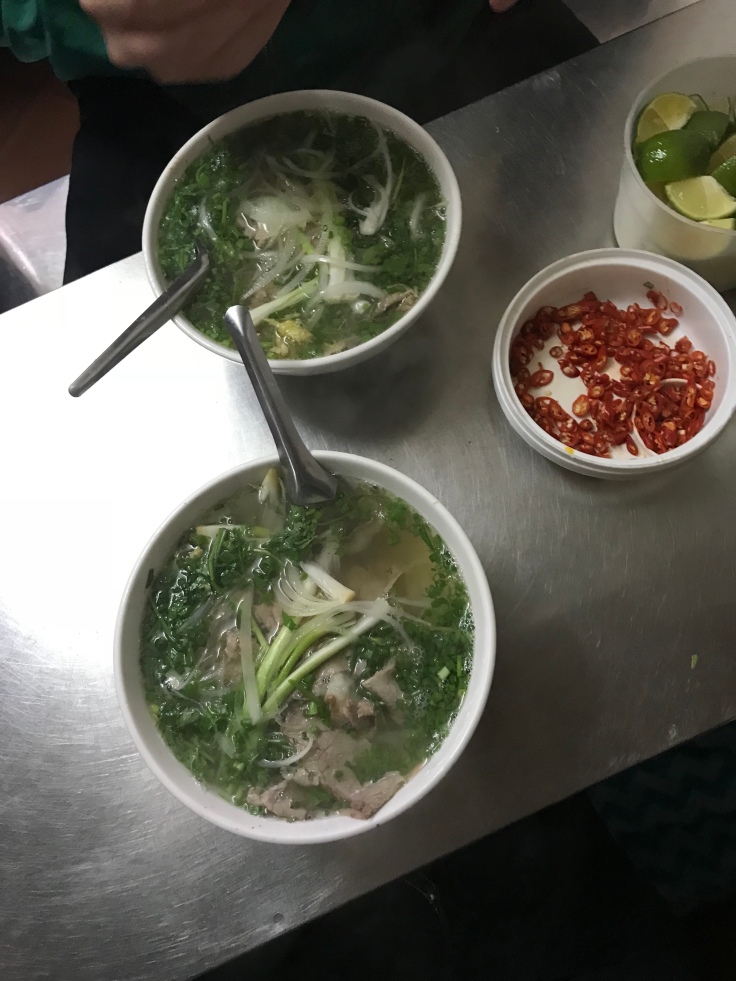 It was pretty good and would definitely go again. But if pho place #1 was selling food, I would go there in a heart beat. After this, I got my 2nd banh my from the corner food cart

After all this, we packed up and headed to our flight home

I really enjoyed Vietnam, a lot more than I was expecting. I had a lot of great food, had interesting life experiences, and met some interesting people. I can’t wait to go back and experience it in warmer weather. Maybe next time will be further south