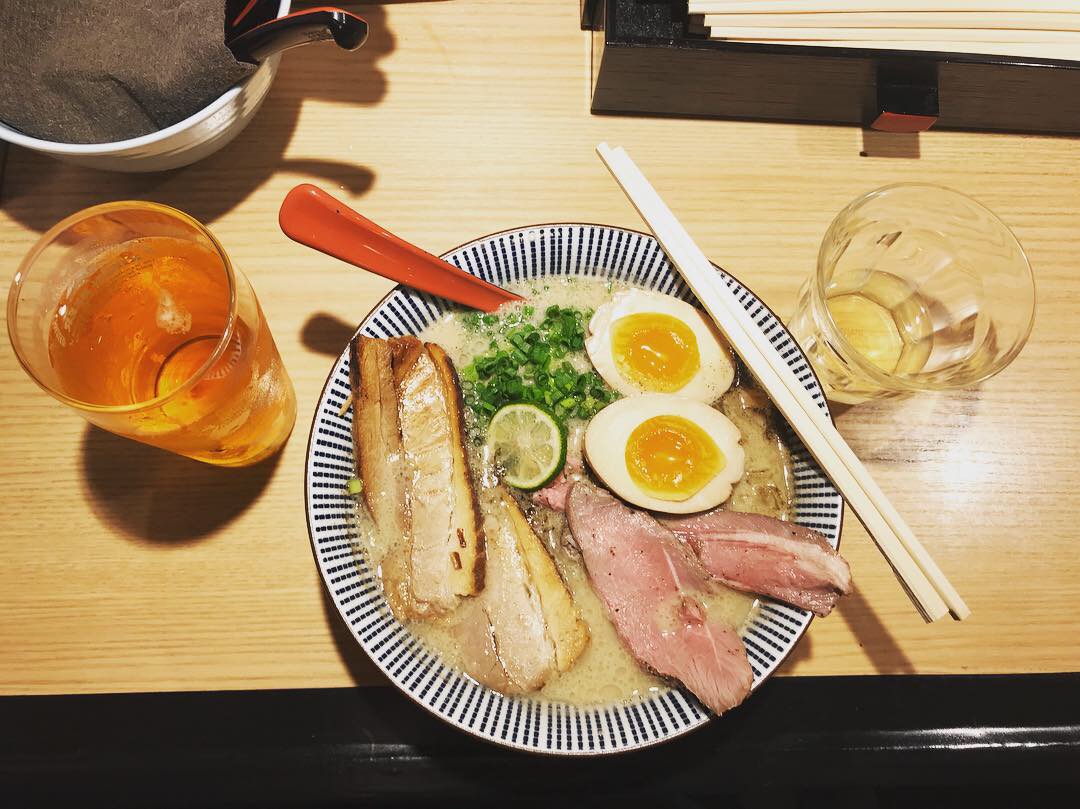 eats a LOT of ramen

No, like really. I ate a lot of ramen in Japan.

For the Chinese Golden Week holiday, Boyfriend and I went to Japan for a 6 day trip. Originally, we were going to be there for 7 days, but we were delayed in the beginning by a day due to the tsunami that hit Tokyo.

We started our first day by going to the Tsuikiji Fish Market. We were luckily able to visit the fish market in it’s original location before it’s move to the new location. We ate GLORIOUS fish. I had fresh salmon, tuna, sea urchin, oysters, and octopus.

The tuna fish heads were so big!

With every fresh fish, we were given freshly made wasabi and only a slight dashes of soy sauce, so you really got the taste of the fish. So delicious

We stumbled across a great beer bar in the area, ØL. Great beer, great vibe, AND they have a mexican truck right outside the bar. Triple win!

We also checked out Mikkeller.  Mikkeller is a Danish brewery that has small stores across the world. We’ve been to the one in San Francisco (yay, home!), Seoul, and now Tokyo. I see that I will be going to all of them in my future.

The first time I went to Japan, I really wanted to go here but I was just out of college and didn’t have a lot of money. It was a frivolous thing that just wasn’t in-budget.

So this time, i went. And as Anthony Bourdain described it, “It is the best show in the world”. It’s a must. It’s the most ridicolous, touristy, amazing thing I’ve ever been to.

While in Tokyo, I ate a lot of ramen. The best ramens I had were from:

Men-shou Taketora – A place my friend took me when I visited Japan many years ago. It is still the bomb, and also happened to be across the street from our hotel in Shinjuku

Mensho Tokyo – The only other one of this store is actually in San Francisco, where the line can be up to 2 hours. Instead, the Tokyo shop is no where near the tourists places, the line is quite short, but the food is still amazing.

After 1.5 days in Tokyo, we headed on the Shinkansen to Kobe, where we stayed in Arima Onsen. It’s this little small village 45 mins outside of Kobe, tucked in the hills, and filled with a lot of onsen hotels.  We got to stay in one of these and have our own onsen hotel experience.

We had an entry way and a sleeping room that could easily fit 10 california king size beds, maybe even bigger. I think 2x the size of the floor plan of our Shanghai-Apartment. And the hotel provided us yukata to wear around the hotel.

We got to spend time relaxing in the onsen. For dinner, we had japanese bbq, and had kobe beef.

We spent a full day wandering the sake breweries in Kobe, learning about the brewing process and trying excellent sake. We ended up buying a few bottles that we carried around with us for the rest of the trip, drinking from this from time to time.

Theres about 4 sake breweries within a 1 hour walk from the 1st to the last, and the other 2 evenly spaced out. Here, there were exhibits, videos, and tasting rooms. Sometimes the tastings were great, sometimes they were mediocre. Our first brewery that we visited was definitely the best.

After Kobe, we headed up to Osaka. Boyfriend has a slight obsession with Osaka after watching a bunch of movies on Netflix about the yakuza.

Here, we wandered a lot and ate a lot of food, as well as hit up club Familymart and Lawsons (basically the asian versions of 7-11, which Japan also has) for Fried Chicken (another Anthony Bourdain recommendations).

I also had the best meal ever, a chicken katsu curry and rice. it was in this little random restaurant off the main road on a not well lit street. The restaurant could fit a max of 8 people, and we happened to get in before a line started forming outside. It was clearly run by a mother, her son in his late 30s to early 40s, and her daughter, maybe 3 years younger. It was excellent

After a few days in Kobe and Osaka, we headed back to Tokyo and stayed in Shibuya. We walked around a lot, drank a lot of beer at ØL and Mikkeller, ate a lot of ramen, visited an izakaya, and a rotating sushi place.

A nice rounded trip to Japan and back. Off to our next adventure